A possible post-Brexit ban on the importation of potatoes from the UK could affect supplies in Ireland next year.

When the UK becomes a third country, it will be outside the legal framework of the European Union's food safety rules.

Many service outlets, including chip shops, use British potatoes for chips.

One of Ireland's longest established chip shops has warned that the ban could not only change the taste and type of chips Irish consumers enjoy, but could lead to shortages and changes in portion sizes.

Leo Burdock said they use British potatoes because of their unique quality, which makes them suitable for frying. 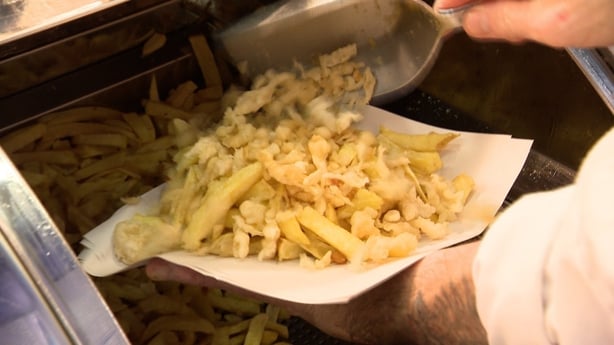 "They have a better balance, chemically their composition, the dry matter and the sugars are more suited for the frying of chips, so that have that crispness and that flavour.

"Teagasc is working on developing a better home grown alternative, but they are not there yet," said Derek Duggan from Leo Burdock.

He is responsible for sourcing potatoes and Leo Burdock does use Irish-grown potatoes at some times of the year. But, like most chip shops, they use UK sourced potatoes most of the time.

Mr Duggan said Brexit is a serious issue and they are concerned about the impact on the taste customers like.

"The supply is going to be affected, the quality is going to be different, we are looking to get as much homegrown stuff as we can, but that might not work out," he said.

That Brexit could hit the chip shop is bad, but the impact on potato growers could be much worse.

The potato crop grows from seed potatoes. Ireland was once an exporter of seed, but over the last 30 years the sector has shrunk.

The shortfall is enormous and many are speculating that the seed potato sector here will have to rejuvenate to deal with the shortfall. But that will take time.

Many of the large seed suppliers have ordered ahead of time and the crop that will be sown early next year has already been imported and is in storage awaiting distribution. 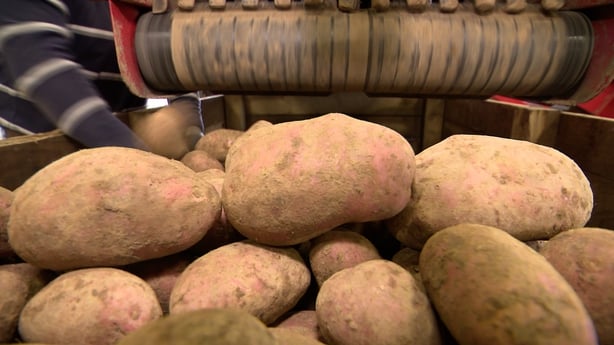 In October, the Department of Agriculture issued a Trader Notification to the sector in which it urged people to import certified seed and ware potatoes from the UK before 1 January 2021. Ware potatoes are those eaten by consumers, also commonly referred to as table potatoes.

The Trade Notice issued by the Department of Agriculture said: "From January 1 2021 the UK will become a 'Third Country' (non-EU Member State) and EU plant health rules in the area of intra-Union trade in plants, plant products, seed potatoes and ware potatoes will no longer apply to the UK.

"Therefore when the withdrawal agreement between the UK and the EU ends on 31 December 2020, the import of certified seed and ware potatoes from Great Britain will be prohibited."

The notice also outlined how resolving the issue could take some time and be dependent on the outcome of trade negotiations between the UK and the European Union.

The notice advises: "The UK has applied to the EU for ‘Third Country' equivalence for the export of certified seed and ware potatoes to the EU.

"This application must go through the EU law-making process and is not immediate. The EU has indicated this process will only begin upon the completion of trade negotiations with the UK."

The impact will not only be felt in Ireland. Some of the big food processors in Britain that make frozen chips buy their potatoes from Belgium and other EU countries. Those imports into Britain will also be prohibited.

That presents a few issues. UK-based companies will struggle to get the raw material to make their frozen chips.

The potatoes normally sold into the UK will have to be sold elsewhere and growers here are concerned that the market could be flooded with spuds, pushing down prices.

Irish potato growers produce around 350,000 tonnes of potatoes every year. But every year around 80,000 tonnes are imported from the UK to meet demand in the service industry, in particular chip shops.

Farmers here grow around 10,000 tonnes which are suitable for chip-making, but there is a significant difference in quality and type between the UK spuds and those grown here.

Teagasc and Bord Bia along with other agencies are working to improve the quality of the Irish crop. Huge strides have been made and the process of research is continuing.

Thomas McKeown grows potatoes on his farm near Kells in Co Meath. He said growers should be okay for next year, as a lot of seed is already in Ireland, but he said: "Going forward it will be a big issue."

Mr McKeown is the chair of the Irish Farmers Associations Potato Committee, and he said since he began farming more than 30 years ago the sector has been on a slow and steady reduction in size.

He said: "When I started here on the farm back in the late 1980s the country grew twice the amount of potatoes than we do now. People’s perception of potatoes has changed, some people see it as a throwback to the famine and we are trying to throw off them shackles and go forward.

"But, it has been a staple in the diet and when lockdown came in March, one of the things that went up in sales was potatoes, sales went up two, three-fold, so, it sometimes shows that people can sometimes forget where they came from."

But Mr McKeown says there could be an opportunity for the sector, one hugely dependent on imports from Scotland.

He said: "We have high-grade status here just like Scotland (for growing seed potato), farmers are very good at doom and gloom, but there are opportunities here. It might help restart the seed industry here and make the public and growers more aware from where their seeds and potatoes come from."

But the most immediate impact will be in chip shops. Research from Bord Bia last year put a handle on just how much Irish people like the chipper.

One in four of us go to a traditional chipper to buy chips, at least once a week. Two-thirds of us think, wrongly, that chipper chips are Irish.

Males and millennials go to the chip shop most often. The final finding from the Bord Bia research is perhaps the most telling, texture and appearance of the chips rates highly in where we choose to buy our chips.

So, the sector is concerned.

The most experienced operators know that moving to Irish spuds after 1 January will make a difference and one that customers will notice.

At Leo Burdocks, Denis Duggan spells it out: "We can get home grown potatoes, they will be different, they won’t be as crisp sadly, the sugar balance won’t be the same.

"It might be an opportunity to get people in touch with home grown stuff, but there will be a different flavour. We might have to alter the salt and vinegar and what we do with the sauces."

Crucially, on the question of the real impact on the trade, Mr Duggan speculated that supply could be an issue.

He said the 10,000 tonnes of Irish potatoes that are suitable for chips have limited availability and are only an option at certain times of the year.

"There could be a shortage, we might have to go to smaller portions. Hopefully that won’t be the case but we will have to wait and see," he said.