The Central Bank has delivered its first detailed forecast for what the economy might look like under a disorderly, no-deal Brexit.

The bank believes the worst impact will be felt in the early part of next year.

It expects disruption to trade at ports and the imposition of tariffs to hit exporters, particularly in the agri-food sector.

It also expects the price of many imported consumer goods, such as cereals and processed foods, to rise due to both tariffs and higher transport costs.

Economic growth will be reduced to just 0.8%, but the underlying position of the economy will slip into recession.

It forecasts 73,000 fewer jobs in Ireland over the next two years.

However, the bank does forecast that the economy will begin to recover in 2021, but warns Brexit will have a long-term impact.

Central Bank Director of Economics and Statistics Mark Cassidy said: "While the underlying outlook for growth in the economy remains positive, there are significant domestic and external risks and uncertainties which threaten that outlook, most notably Brexit." 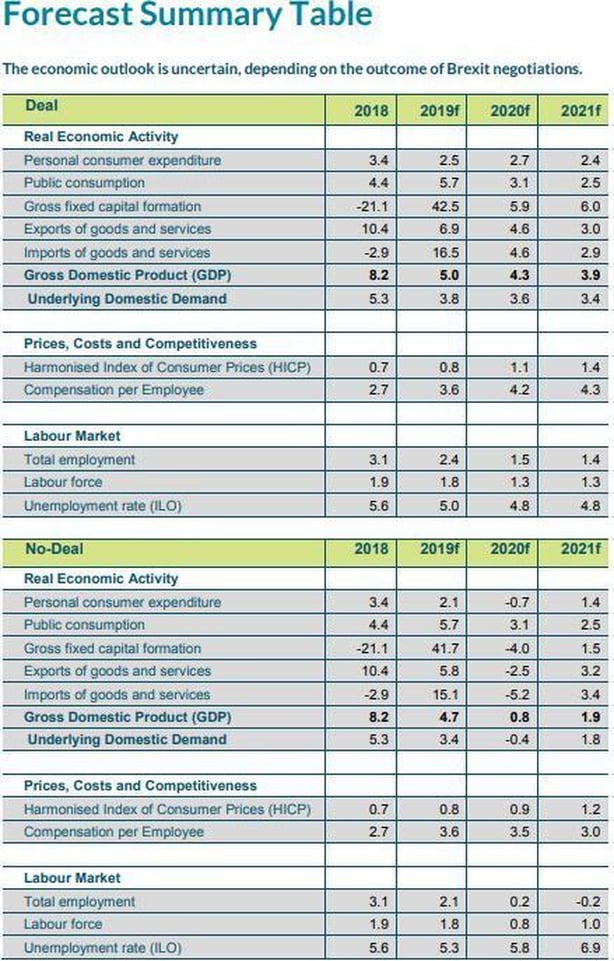 It is the first time the Central Bank has published two forecasts for the economy because of the "extraordinary and unprecedented nature" of Brexit.

Mr Cassidy added: "In the event that a no-deal Brexit were to occur there would be a significant weakening of activity across many parts of the economy.

"Regions and sectors which are more reliant on trade with the UK and which are more vulnerable to the imposition of tariffs and non-tariff barriers, particularly sectors such as agriculture, food and the broad SME sector, are likely to be more adversely affected.

The Central Bank has published the fourth Quarterly Bulletin of 2019, which outlines divergent paths for the Irish economy depending on the outcome of Brexit process [1/4] https://t.co/ol5ELwYchL pic.twitter.com/bIVb3KhQJ1

"Our forecast is for around 73,000 fewer jobs being created by the end of 2021 compared to a situation where a deal on Brexit can be reached.

"If a disorderly, no deal Brexit can be avoided, it is projected that underlying economic activity will grow at a relatively solid pace in coming years, though with some moderation in growth in prospect.

"In a no-deal scenario, however, significant disruption and the negative shock to economic activity would adversely affect output and employment and the path ahead for the next few years would be very different."