British Prime Minister Boris Johnson has proposed a "new protocol on Ireland/Northern Ireland" to replace the backstop that was included in the original Withdrawal Agreement negotiated by Theresa May.

Mr Johnson described the backstop as "a bridge to nowhere" in his letter and said a new way forward must be found.

In the letter to European Commission President Jean-Claude Juncker, he said that failure to reach a Brexit deal would be a "failure of statecraft for which we would all be responsible" as he set out his plans for an agreement.

Mr Johnson sent the UK's formal proposals to the EU following his speech to the Conservative Party conference earlier today.

The Taoiseach said the proposals do not fully meet the agreed objectives of the backstop, following a phone call with Mr Johnson this evening.

However, he indicated that he would study them in further detail and would consult with the EU institutions, including the task force and Ireland's EU partners.

The two men are due to speak again next week.

Taoiseach @LeoVaradkar and the UK Prime Minister, @BorisJohnson  spoke by phone this evening, shortly before 6pm. They discussed the latest proposals from the UK.
The Taoiseach said the proposals do not fully meet the agreed objectives of the backstop. https://t.co/64bujQS26a

In his letter Mr Johnson lays out five elements of the protocol:

"First and foremost, our proposal is centred on our commitment to find solutions which are compatible with the Belfast (Good Friday) Agreement. This framework is the fundamental basis for governance in Northern Ireland and protecting it is the highest priority for all.

Second, it confirms our commitment to long-standing areas of UK/Ireland collaboration, including those provided for in the Belfast (Good Friday) Agreement, but also others, in some cases predating the European Union: the Common Travel Area, the rights of all those living in Northern Ireland, and North/South cooperation. These were set out in the previous Protocol and should be maintained in the new one.

Third, it provides for the potential creation of an all-island regulatory zone on the island of Ireland, covering all goods including agrifood. For as long as it exists, this zone would eliminate all regulatory checks for trade in goods between Northern Ireland and Ireland by ensuring that goods regulations in Northern Ireland are the same as those in the rest of the EU.

Fourth, this regulatory zone must depend on the consent of those affected by it. This is essential to the acceptability of arrangements under which part of the UK accepts the rules of a different political entity. It is fundamental to democracy. We are proposing that the Northern Ireland Executive and Assembly should have the opportunity to endorse those arrangements before they enter into force, that is, during the transition period, and every four years afterwards. If consent is not secured, the arrangements will lapse. The same should apply to the Single Electricity Market, which raised the same principles.

Fifth, and finally, under these arrangements Northern Ireland will be fully part of the UK customs territory, not the EU Customs Union, after the end of the transition period. It has always been a fundamental point for this Government that the UK will leave the EU customs union at the end of the transition period. We must do so whole and entire. Control of trade policy is fundamental to our future vision."

Today I have set out a fair and reasonable compromise for replacing the backstop so we can get Brexit done by 31 October. pic.twitter.com/66WpFGhThU

Mr Johnson said that the protocols are "entirely compatible with maintaining an open border in Northern Ireland". He said it is "entirely reasonable to manage this border in a different way".

He proposed that "all customs processes needed to ensure compliance with the UK and EU customs regimes should take place on a decentralised basis, with paperwork conducted electronically as goods move between the two countries, and with the very small number of physical checks needed conducted at traders' premises or other points on the supply chain.

"To enable this, we should both put in place specific, workable improvements and simplifications to existing customs rules between now and the end of the transition period, in the spirit of finding flexible and creative solutions to these particular circumstances.

"These arrangements can be underpinned by close co-operation between UK and Irish authorities. All this must be coupled with a firm commitment (by both parties) never to conduct checks at the border in future."

Mr Johnson said that he recognised "that our proposals will mean changes from the situation that prevails in Ireland and Northern Ireland now.

"Our common task is to make sure that these changes entail as little day-to-day disruption as possible to the current situation. I believe that our proposals will achieve that."

Mr Johnson also said that in order to support Northern Ireland through this transition his government is proposing "a New Deal for Northern Ireland", with appropriate commitments to help boost economic growth and Northern Ireland's competitiveness, and to support infrastructure projects, particularly with a cross-border focus.

He said that "taken together, these proposals respect the decision taken by the people of the UK to leave the EU, while dealing pragmatically with that decision's consequences in Northern Ireland and in Ireland".

Mr Juncker warned that there were "problematic points" in the proposed new deal. He highlighted concern about the proposed customs regime aimed at avoiding checks on the border.

But he recognised "positive advances" in the British offer during a phone call with Mr Johnson, telling him that EU negotiators would now "examine the legal text objectively".

The DUP has said the proposals would ensure that Northern Ireland would be out of the EU customs union and the single market as with the rest of the UK.

A British government official said: "I think support for Northern Ireland is up for discussion but what that's talking about is putting in place support as Northern Ireland transitions into a post-Brexit world.

"I wouldn't dispute that support is likely to have financial implications but I think the focus is to provide support to Northern Ireland as we move forward outside the EU."

Reacting to the Brexit proposal, Labour leader Jeremy Corbyn said: "It's worse than Theresa May's deal. I can't see it getting the support that he thinks it will get."

Mr Corbyn said it will create a Britain of deregulation and of under-cutting, adding: "I think it will also undermine the Good Friday Agreement."

He said: "Boris only wants to change one part of the Withdrawal Agreement. Despite his words there is no guarantee that we will leave the customs union, and any future trade deal needs good faith from the EU side.

"It's like putting your head in a crocodile's mouth and hoping for the best."

First Minister of Scotland Nicola Sturgeon said: "Hard to see how the UK government Brexit 'proposals' fly. And hard to escape conclusion that they're designed to fail.

"For Scotland, the fundamental point remains - these proposals would take us out of the EU, single market and customs union against our will. That's unacceptable." 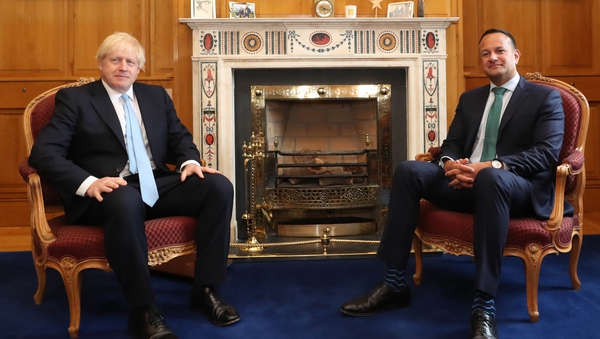