In the biggest demonstration, thousands of people gathered outside the gates of Downing Street chanting "Boris Johnson shame on you!"

The demonstrations come ahead of an intense political week in which Mr Johnson's opponents will go to court to block his move to suspend parliament from mid-September.

They will also look to legislate against leaving the European Union without an agreement.

Mr Johnson has promised Britain will depart the EU on 31 October under any circumstances.

His parliament suspension was widely seen as a way of limiting the time his opponents have to organise against him. 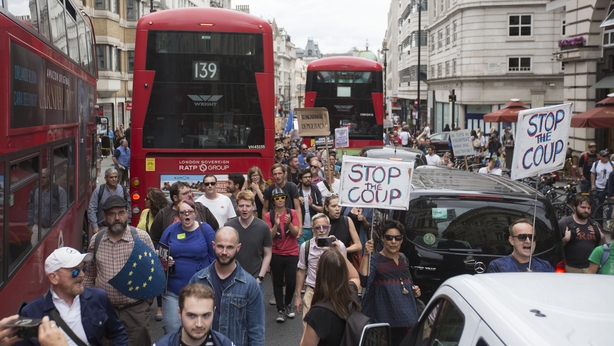 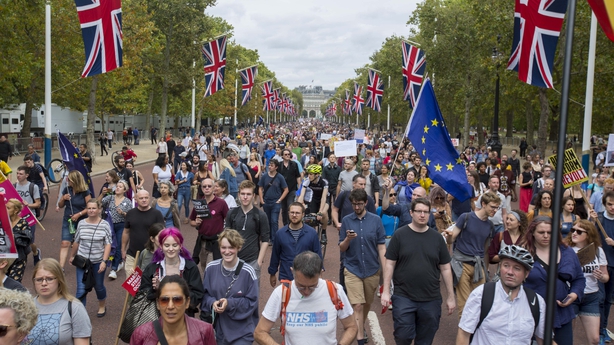 In London, participants heard speeches from opposition politicians on a stage erected on Whitehall before marching through Westminster.

Some held hand-written signs reading "defend democracy: resist the parliament shutdown" and "wake up UK! Or welcome to Germany 1933".

Organisers using the slogan #StopTheCoup claimed as many as 100,000 people had turned out in London.

A small counter-protest was also held in London with around a dozen men walking through the crowds escorted by police shouting: "What do we want? Brexit! When do we want it? Now." ‘No one voted for Boris’ ... Small number blocking Westminster bridge... main demo due to end around now @rtenews pic.twitter.com/PrwySuNRpU

Labour leader Jeremy Corbyn has threatened to hold a no-confidence vote in the government, which has a parliamentary majority of just one, if MPs fail to pass a law to prevent a no-deal Brexit.

He said that next week was politicians' "last chance" to act.

"We will do absolutely everything we can to prevent a no-deal Brexit," Mr Corbyn vowed during a three-day visit to Scotland. 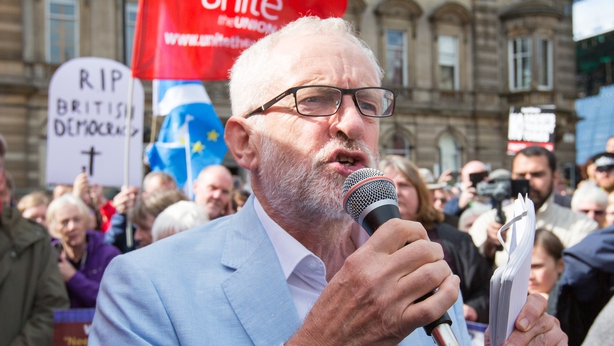 Mr Johnson has said he is ready to strike a deal as long as provisions for Britain to stay in the customs union even after Brexit are axed from an existing deal struck by his predecessor Theresa May.

But EU leaders have said they are still awaiting concrete proposals from London. Mr Johnson's Brexit adviser David Frost is expected back in Brussels for talks next week.

Mr Johnson this week cautioned MPs against trying to hamper his plans, saying a decision to delay Brexit again would do "lasting damage" to public trust in politics.

He said the opposition's efforts could in fact help lead to a no-deal Brexit as EU counterparts would be less likely to offer a compromise if they believed Brexit could be stopped.

Queen Elizabeth gave her approval to Mr Johnson's decision to suspend parliament for mid-September until 14 October on Wednesday, sparking widespread outrage, legal challenges and promises of resistance from parliamentarians. 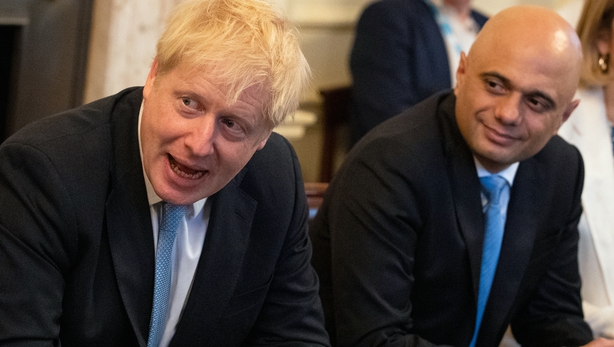 Chancellor Sajid Javid has defended parliament's suspension, despite saying during the recent Conservative leadership contest when he stood against Mr Johnson that "you don't deliver democracy by trashing democracy".

He told BBC Radio: "It is quite usual this time of year, parliament goes into what's called a conference recess and it doesn't usually sit for some time in September and early October.

"It's right because we are focusing on the people's priorities."

Mr Javid also rejected claims that Downing Street has not given him proper authority over the Treasury in the wake of controversy following the sacking by Number 10 of one of his key aides.

Mr Javid insisted he had a "fantastic" relationship with Mr Johnson, after the abrupt firing of the chancellor's adviser Sonia Khan.

It is understood Mr Javid was not informed of the sacking before the Mr Johnson's senior adviser Dominic Cummings took the decision on Thursday evening.

Ms Khan was escorted from Downing Street by a police officer after the dismissal.

The chancellor, who delivers his keynote spending review to the Commons next week, raised the issue with Mr Johnson at a meeting on Friday and was reported to be "absolutely furious" about the situation.

Mr Javid told BBC Radio 4's Today programme: "I am not going to discuss any personnel issues, it would be inappropriate.

"I think my views are well understood. The relationship is fantastic with the Prime Minister."

Mr Javid rejected opposition assertions that Downing Street is not allowing him enough authority over the Treasury, saying: "That's a picture being painted by the government's opponents.

"Every government's had opponents. They will always paint pictures that they want to exist, but they are not really there."