The European Union's chief Brexit negotiator has warned that 'no-deal' Brexit preparations are "now more important than ever before".

Michel Barnier also ruled out the EU doing more to help the UK reach a deal on an orderly withdrawal from the bloc.

He made the comments after MPs in London rejected the revised EU Withdrawal Agreement.

"The EU has done everything it can to help get the Withdrawal Agreement over the line," Mr Barnier tweeted.

"The impasse can only be solved in the UK. Our 'no-deal' preparations are now more important than ever before."

The EU has done everything it can to help get the Withdrawal Agreement over the line. The impasse can only be solved in the #UK. Our "no-deal" preparations are now more important than ever before.

The Tánaiste has said that he is deeply disappointed with the result of the vote in Westminster.

Simon Coveney said the Government had worked for months with its EU partners to try to offer the assurances and clarifications that the British government were looking for to get the deal ratified.

He said the onus was now on the British government and the British parliament to come up with solutions.

The Government would continue to plan for a no-deal Brexit which, he said, looks closer now that it did a few hours ago.

A no-deal Brexit scenario is a lose, lose, lose for everybody, he warned.

"We need to all work to avoid that but we cannot do it without the British parliament buying into that process and agreeing something."

A spokesman for the President of the European Council, Donald Tusk, warned that the House of Commons' rejection of the Brexit agreement "significantly" increases the risk of the UK crashing out of the EU without a deal.

The spokesman said that Mr Tusk regretted the result, but warned that from Brussels' viewpoint "it is difficult to see what more we can do.

"If there is a solution to the current impasse, it can only be found in London."

Roger Pollen, from the Federation of Small Businesses in Northern Ireland, said the defeat has heightened uncertainty.

"Regardless of the ever-changing circumstances which Brexit brings, it is clear that an Assembly and Executive (in Stormont) would have a key role during the transition period to decide whether the backstop would need to be introduced, or in the event of a no-deal scenario for purposes of emergency decision making.

"Unfortunately, the devolved institutions continue to be missing in action, with no talks process ongoing to restore them.

"For small businesses, they just want to know what economic environment they will face after March 29.

Aodhán Connolly, director of the Northern Ireland Retail Consortium, said there was frustration amongst the retail community at the lack of certainty.

"Retailers are now simply beyond frustration at the lack of certainty and clarity over future trading.

"We have no indication of customs, tariffs, documentation or checks that will be in effect on day one and we are no clearer as to the status of the border."

Ibec, the group that represents Irish business, has expressed deep concern at the inability of the British government to ratify the agreement.

In a statement, Ibec said a long extension was needed to avoid a 'no-deal' exit, safeguard the Good Friday Agreement and allow the UK political system to reach agreement on a way forward.

The Irish Exporters Association has said it regrets the outcome of tonight’s vote.

It said there is still no clarity on the terms of the UK’s departure and its future trading relationship with the EU and Irish businesses trading with or transiting goods through the UK, must prepare for all eventualities. 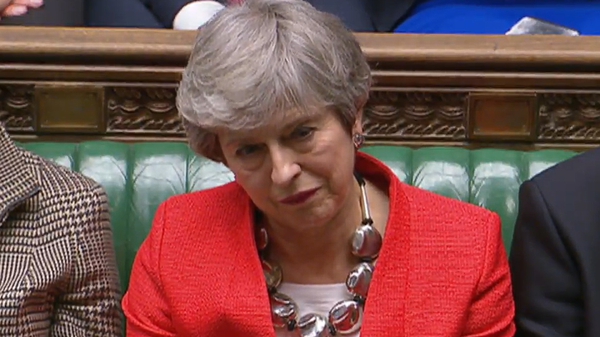