Theresa May has issued a plea for support as the showdown on her Brexit deal looms, warning the UK will be plunged into crisis if MPs reject the Withdrawal Agreement.

In a stark message ahead of Tuesday's Commons vote, the British Prime Minister said "no-one knows" what will happen if her plan is defeated, with the possibility of Brexit being derailed completely.

Mrs May said both the democratic and economic cases for backing her deal are "clear", and issued a plea to MPs: "Let's get it done."

The prime minister used her speech in Leave-supporting Grimsby to both urge the European Union to give ground on the backstop and call on Tory Eurosceptics to recognise that failure to back the deal could result in a softer Brexit or another referendum.

"Next week, MPs in Westminster face a crucial choice: Whether to back the Brexit deal or to reject it," she said.

"Back it and the UK will leave the European Union. Reject it and no-one knows what will happen.

"We may not leave the EU for many months, we may leave without the protections that the deal provides. We may never leave at all."

Rejection of the deal would be a "moment of crisis".

Aiming her words directly at EU leaders, Mrs May said: "Now is the moment for us to act. We've worked hard together over two years on the deal. It's a comprehensive deal that provides for an orderly exit from the EU and sets the platform for an ambitious future relationship.

"It needs just one more push to address the final specific concerns of our Parliament. So let's not hold back. Let's do what is necessary for MPs to back the deal on Tuesday."

Mrs May also sent a message of warning to hardline Brexiteers considering voting against her deal next week.

That could lead to an extension of Article 50 and possibly "a form of Brexit that does not match up to what people voted for", or a second referendum. 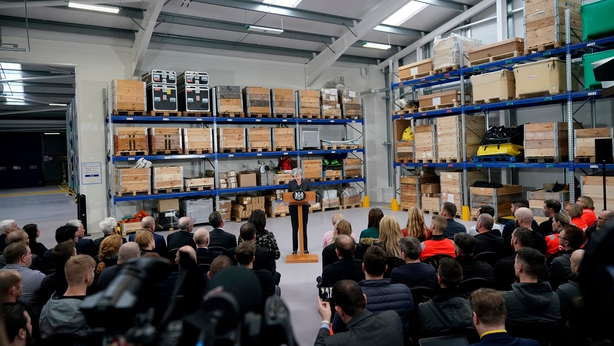 Addressing workers at the Orsted wind turbine plant, she said a softer Brexit deal "could mean no end to free movement, no ability to strike our own trade deals, no end to the big annual payments, no taking back control".

She added: "If MPs reject the deal, nothing is certain. We would be at a moment of crisis.

"MPs would immediately be faced with another choice. Either we leave the EU with no deal on March 29 - I don't believe that would be the best outcome for the UK or the EU - or we delay Brexit and carry on arguing about it, both amongst ourselves and with the EU. That is not in our interests either.

"More talking will not change the questions that need to be settled, and delay risks creating new problems."

Mrs May added that if the UK asks for a delay simply to give MPs more time to decide what to do, "the EU might insist on new conditions that were not in our interests".

The EU said technical discussions are ongoing and insisted Brussels has already come forward with ideas to resolve the deadlock.

👇 I briefed EU27 Ambassadors and EP today on the ongoing talks with #UK. Following the EU-UK statement of 20 Feb, the EU has proposed to the UK a legally binding interpretation of the #Brexit Withdrawal Agreement. Most importantly:

Taoiseach Leo Varadkar said the UK government had failed to offer any solutions on the Withdrawal Agreement.

Speaking in Dublin, he said the deal reached in November, including the backstop, was "already a compromise" delivered in response to British requests.

"We were and remain happy to apply the backstop only to Northern Ireland if they want to go back to that, it doesn't have to trap or keep all of Great Britain in the single customs territory at all or for a long period," said Mr Varadkar.

But DUP leader Arlene Foster called for Dublin and Brussels to take a "fresh approach".

"A sensible deal requires the EU27 to be reasonable and pragmatic," she said.

"The European Union must be in deal-making mode."