British Prime Minister Theresa May has been given a Brexit boost as key Tories have signalled swinging behind her stance in exchange for movement on the backstop.

Chairman of the highly influential 1922 Committee of backbench Tories Graham Brady expressed optimism that a breakthrough on the backstop was close.

The ERG has drawn up "three tests" the British government must pass to win backing, according to the Sunday Times.

In private talks with Attorney General Geoffrey Cox, the ERG called for a legally-binding mechanism to escape the backstop, with a clear exit route and an unambiguous rewrite of the language in the government's legal advice, the newspaper said.

The stance has been drawn up in conjunction with the DUP, according to the Sunday Times.

Mr Brady made it clear that he could swing behind the prime minister's Withdrawal Agreement ahead of crunch Commons votes.

Writing in the Mail on Sunday, Mr Brady said: "The whole country is tired of vacillation and delay.

"When the right compromise is offered, we should pull together behind the Prime Minister and help her to deliver our exit from the European Union on March 29."

Many Brexiteers have expressed opposition to the backstop as it would leave the UK obeying EU customs rules if no wider trade deal is agreed after a transition period. 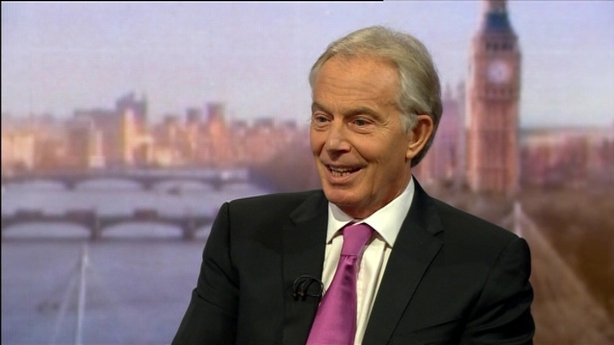 Speaking on BBC One's Andrew Marr Show, Mr Blair advised members of the party he once led to "use an extension to come to a conclusion - hard versus soft or back to the people."

"I think you'll get to another referendum when people understand that a hard Brexit is going to be deeply economically painful for the country and a soft Brexit means we just become a rule-taker.

"It's in those circumstances that I think you mobilise a majority in Parliament to say the sensible thing in these circumstances is to put it back to the people, or pass her deal subject to a confirmatory referendum."

Mr Blair added: "I think it's absolutely inevitable that if you put the choice before the country - hard Brexit Tory party, hard-left Labour Party - it doesn't matter what I say, what I want to happen, what anyone else says, you leave that amount of fertile territory open, someone is going to cultivate it."

Mr Blair said he is "deeply concerned" about Labour's direction and policy, adding: "If you want to get back to winning ways, this is not the position to be in."

He said he believed Labour deputy leader Tom Watson has "shown really great leadership" in recent weeks when asked about the move to set up a social democratic group within the party.

The former prime minister added: "As a result of what he's doing, he's encouraging people who do share a perspective of the Labour Party as a governing, modern, progressive party, he's actually encouraging them in a sense to stay because he's providing a space within which people can debate and argue."

Asked if delaying departure from the EU beyond 29 March would be going back on a promise, Dr Fox said: "It would be very unfortunate were that to happen.

"But, if we have no option, in order to deliver a smooth Brexit, then so be it."

Dr Fox said: "I think that to attempt to have a delay mechanism in order to thwart the process of Brexit itself is actually politically completely unacceptable.

Labour MPS will have to back new Brexit referendum vote

Shadow chancellor John McDonnell has signalled Labour will impose the whip on its MPs to back a bid for a new Brexit referendum.

Labour divisions on the issue were thrown into sharp focus as former minister Caroline Flint estimated up to 70 of the party's MPs are opposed to a second national EU withdrawal poll.

Mr McDonnell told Sky News' Sophy Ridge on Sunday: "Normally we will whip and that will be decided in the normal way by the chief whip and the shadow cabinet and the party overall.

"I think on an issue as this we would see a whip but also you've got to respect people's views and their constituency interests as well, and the whipping arrangement will be determined in discussion in due course.

Ms Flint appealed for the party leadership to allow a free vote and also urged colleagues to back an improved Brexit deal given the 2017 election promise to respect the 2016 referendum result.

The MP told Sky News: "My appeal to John McDonnell, to Jeremy Corbyn, to Keir Starmer, is allow MPs to have a free vote on an improved deal.

"So those MPs who want a second referendum can vote for that but those of us who want to keep our promises to our electorate can also keep faith with those people and vote for an improved deal."

Ms Flint also said: "I think there is something like 60 or 70 Labour MPs who feel as strongly as I do against a second referendum."

She added if there was a free vote among Labour MPs then "tens, twenties, thirties would vote for an improved offer".

MPs have been told by Prime Minister Theresa May they will have a "meaningful vote" on her Brexit plans by 12 March, and Labour is expected to use the occasion to put down an amendment on a second referendum.

The PM said that if her deal is rejected, MPs will be able to vote on whether the UK can leave the EU in a no-deal scenario, and if that is rejected, the Commons can decide on whether to extend Article 50 and delay Brexit.