EU chief Brexit negotiator Michel Barnier has indicated he does not believe the UK will have enough time to approve British Prime Minister Theresa May's withdrawal deal by the scheduled exit date of 29 March.

Mr Barnier suggested a "technical extension" of up to two months may be needed.

Mrs May has told MPs they will have a "meaningful vote" on her withdrawal plans by 12 March.

Asked if he thought it was possible to reach an agreement by 29 March, even if Westminster gave the green light this month, Mr Barnier told Spain's El Mundo newspaper: "No."

Referencing a technical extension, Mr Barnier added: "But you'll have to ask the United Kingdom. If there is a vote on the 12th and it takes two months to carry out the procedure, it would be justified."

Mrs May has said that if her deal is rejected by Parliament, MPs will be able to vote on whether the UK can leave the EU in a no-deal scenario, and if that is rejected, the Commons can decide on whether to extend Article 50 and delay Brexit for a limited period.

Mr Barnier has also stated that Brussels is ready to give the UK further "guarantees, assurances and clarifications" that the Irish backstop should only be temporary.

He insisted that the controversial measure, intended to avoid a hard border on the island of Ireland, will not be removed from the Withdrawal Agreement.

While acknowledging Brexiteer concerns that the backstop is a trap that would keep the UK tied to the EU indefinitely, Mr Barnier insisted it is only "insurance" intended for the "worst-case scenario".

Speaking to German newspaper Die Welt, Mr Barnier said: "We know that there are misgivings in Britain that the backstop could keep Britain forever connected to the EU.

"This is not the case. And we are ready to give further guarantees, assurances and clarifications that the backstop should only be temporary."

The guarantees in question could come as an adjunct to the Withdrawal Agreement in the form of an "interpretive document", he said.

However the EU will not allow for a time limit to be placed on the backstop or give Britain the right to unilaterally pull out of it, Mr Barnier added.

The development came as the president of Slovenia suggested the country and many other EU states would be willing to accept a short delay to Brexit.

Borut Pahor, who sat on the European Council of leaders when he was prime minister, told Sky News: "I think Slovenia and a lot of other countries would say yes.

"I think that nobody wants to see a hard Brexit in a chaotic way, which would damage London and Brussels and Ljubljana and every country."

However Mr Pahor said the extension should not be used simply to postpone the making of a compromise decision.

Mrs May has insisted she does not want a delay Brexit and believes the UK can leave the EU as scheduled on 29 March.

Meanwhile, Boris Johnson has hit out at mounting calls for a second referendum on European Union membership predicting it would arouse widespread "anger".

The UK's former foreign minister turned tormentor of Prime Minister Theresa May also mocked the "bastards" who run the EU as he attacked the bloc. 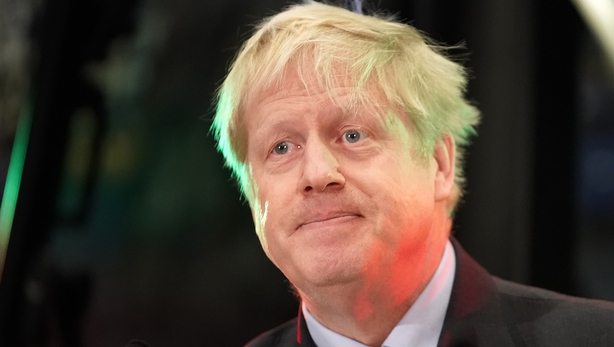 Questioned at a conference in New Delhi about pressure for a repeat of the 2016 referendum in Britain, Mr Johnson said "I don't think that's possible."

"I think that the anger in the population would be so intense and the tedium - people would be driven absolutely round the bend by the idea of having to vote on this thing again."

"It was a very acrimonious, very divisive campaign" in 2016, he said, predicting any second vote would produce the same result.

Mr Johnson quit as foreign minister in Mrs May's right-wing government last year in protest at her proposed departure deal with the EU - which would keep Britain temporarily in the EU customs union as a "backstop" until problems with the Irish border are settled.

Parliament has since rejected the deal and Mrs May is battling political turmoil ahead of the scheduled 29 March departure date.

"We need to get this Brexit done properly and our prime minister now needs to punch a hole through that backstop and it has got to be a hole that is big enough to fit the entire United Kingdom," Mr Johnson told the India Today media group conference.

"Once she does that we are free. We are at the races. I am hoping she will do it," he declared of the intense talks between the government and Brussels.

Mr Johnson also told the Indian audience that Brexit was misunderstood by those who say it is an "xenophobic, nationalistic and reactionary phenomenon."

"My objection to the EU was not that it was run by foreigners. The problem is we don't really know who is running it," Johnson said, mocking the five presidents of the EU commission, council of ministers, parliament and other bodies.

"I couldn't tell you who they are, or what they do or how they came by their jobs or how they may be removed from office.

Mr Johnson said those who predict disaster for Britain outside the bloc are "Chicken Lickens" but said there were still "many in the upper reaches of the UK government."