DUP leader Arlene Foster has said it is very noticeable that the Government’s contingency plans to address a no-deal Brexit do not include plans for infrastructure on the border.

The Government this morning published a wide range of worst case contingency laws that will be enacted if the UK leaves the EU without a deal.

The Omnibus Bill, which will be fast-tracked through the Oireachtas, is designed to support businesses and jobs affected by a no-deal and secure ongoing access to essential services and products across the Irish border.

Ms Foster told RTÉ News that she remains hopeful that a deal can be struck on Brexit before the UK leaves the European Union on 29 March.

She said: "We don’t want to see any infrastructure on the border going forward.

She was speaking in Leitrim, where she was attending an event to mark the opening of a section of the demonstration stretch of the Sligo, Leitrim and Northern Counties Railway (SLNCR) Greenway.

Ms Foster also posed for photos with Minister for Transport Shane Ross in the hall used in the film Ballroom of Romance in Glenfarne. 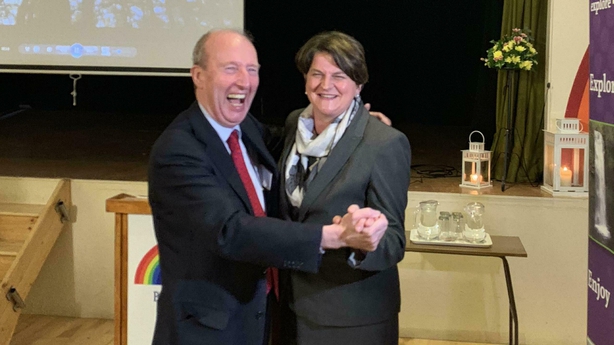 Her DUP colleague Sammy Wilson said a lack of border checks in the plans proved warnings about the frontier were just careless rhetoric.

The party's Brexit spokesman said talk from Ireland and the EU about the risks of a hard border returning was designed to manipulate people's fears.

"No one is building a so-called hard border or going back to checkpoints with soldiers.

"Such talk was rhetoric designed to ferment fear in genuine communities along both sides of the border. To manipulate people's fears in such a way was careless and reckless."

DUP leader Arlene Foster wants to see the border remain open, but in a situation where Northern Ireland is outside the EU and the Republic of Ireland is staying in. #brexit pic.twitter.com/t5b4ZoV3iw