The two leaders discussed Brexit and the restoration of power-sharing at Stormont during two-and-a-half hours of talks over dinner.

The talks were reported to have been "very warm" and "productive".

While there were no formal negotiations, it is understood both sides renewed their commitment to secure a Brexit deal and restore the Executive in Northern Ireland.

Mrs May left Farmleigh at 10.30pm and flew back to London.

The British Prime Minister is attempting to break the impasse over the backstop plan in the Brexit Withdrawal Agreement.

Mrs May was joined for the private dinner at Farmleigh House by the UK's Brexit negotiator Olly Robbins and her chief-of-staff Gavin Barwell.

Discussions took place over a menu of cured organic salmon for starter and fillet of beef, dauphinoise potato, green beans and parsnip puree for the main course.

Dessert was a selection of Irish cheeses, meringue nest topped with seasonal fruit. Mrs May, who is diabetic, had fruit for dessert.

There was no scheduled news conference after the meeting. 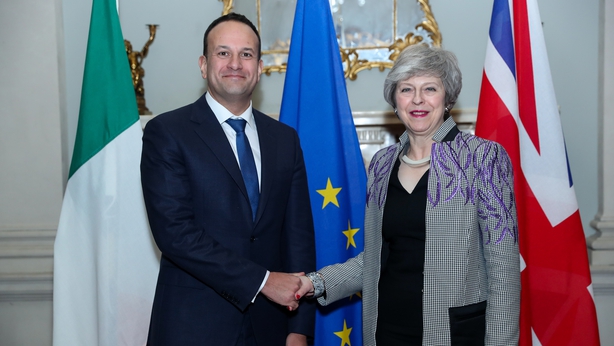 However, the Taoiseach said earlier that while the meal presented an opportunity to "share perspectives" on Brexit, actual negotiations "can only be between the European Union and the United Kingdom".

"There is much more that unites us than divides us and time is running short, and we need to get to an agreement really as soon as possible, and I'll be working very hard and redoubling my efforts, along with government, to do that."

He added: "I believe ultimately we are going to have to get this deal over the line and I am determined to do that."

Downing Street said Mrs May would be "emphasising what we are looking for, seeking the legally binding changes to the Withdrawal Agreement that parliament said it needs to approve the deal".

Mr Cox has been leading work within Whitehall on providing either a time limit on the backstop or giving the UK an exit mechanism from it.

The Government insists the backstop cannot be time-limited if it is to provide an effective "insurance policy" against the return of a hard border on the island of Ireland.

Mrs May, however, has warned she needs legally binding assurances the UK will not be tied to EU rules indefinitely through the backstop if she is to get her Brexit deal through the House of Commons.

Mrs May and Mr Juncker have agreed to meet again before the end of the month to take stock of the situation.

Mr Barnier said he was "looking forward" to the meeting in Brussels, but restated the EU's position that the Withdrawal Agreement cannot be reopened.

"I will listen to how the UK sees the way through," the EU negotiator said.

"The EU will not reopen the Withdrawal Agreement. But I will reaffirm our openness to rework the Political Declaration in full respect of European Council guidelines."