The European Council President Donald Tusk and the Government have both said that the Withdrawal Agreement is not open for renegotiation after British MPs gave their backing to proposals to replace the backstop.

Mr Tusk was responding to a vote in the House of Commons this evening where British MPs authorised Prime Minister Theresa May to go back to Brussels to try to renegotiate her Brexit deal.

"The Withdrawal Agreement is and remains the best and only way to ensure an orderly withdrawal of the United Kingdom from the European Union.

"The December European Council conclusions are very clear on this point.

"We will continue our preparations for all outcomes, including a no-deal scenario. We will also continue the EU's process of ratification of the agreement reached with the UK Government," said the statement.

If there were to be a request for an extension of Article 50, the statement continued, the EU27: "Would stand ready to consider it and decide by unanimity. The EU27 will adopt this decision, taking into account the reasons for and duration of a possible extension, as well as the need to ensure the functioning of the EU institutions."

"President Tusk will stay in close contact with EU27 leaders," the statement concluded.

Theresa May says the UK will seek 'legally binding changes to the Withdrawal Agreement that deal with concerns on the backstop' pic.twitter.com/fF0sPgDPIO

A Government statement also reiterated that the Withdrawal Agreement is not open for re-negotiation.

In a statement issued this evening, the Government said the EU position on the Withdrawal Agreement, including the backstop, "has not changed".

It said the best way to ensure an orderly withdrawal is to ratify the Withdrawal Agreement.

The statement also said a change in the UK red lines could lead to a change in the Political Declaration on the framework for the future relationship, and a better overall outcome.

Taoiseach Leo Varadkar is expected to speak with his British counterpart tomorrow morning.

Read more:
British MPs vote to replace backstop with 'alternative arrangements'
Brexit: What is the backstop?

Backstop was agreed by UK/EU as the insurance policy to avoid a hard border in all scenarios. We hope it will never be used, or be replaced quickly by a future relationship agreement. But it is necessary and tonight’s developments at Westminster do nothing to change this. #Brexit

Fianna Fáil's Brexit spokesperson Lisa Chambers said she was disappointed to see the amendment passed in Westminster calling for "alternatives arrangements" to the backstop.

She called on the UK to clarify what are the "alternative arrangements" to avoiding a hard border.

He said Mrs May was deluding herself if she thinks she can negotiate legally binding changes to the Backstop.

"She is hoping that the EU and Ireland blinks as the Tories threaten all with a hard crash Brexit," he said.

The vote by MPs has been described as "the ultimate betrayal" by the leader of the SDLP.

Speaking to RTÉ News, Colum Eastwood said: "They are messing around with the Good Friday Agreement, with our peace process and with all the progress that we have made.

"It's very important that the Irish Government and the EU stand firm behind the people of Northern Ireland who are very, very worried tonight". 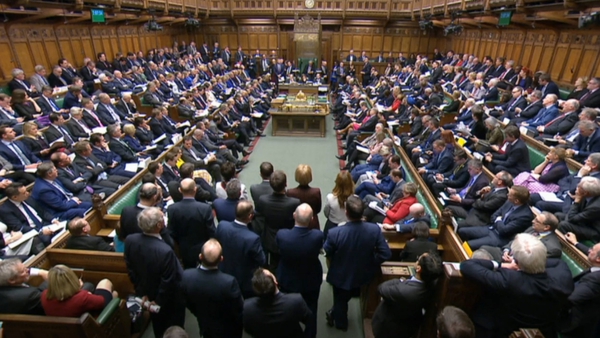