British MPs will vote on whether they have confidence in the government, after Prime Minister Theresa May's Brexit deal suffered a heavy defeat in parliament.

Here is how the process, which could ultimately trigger a general election, will work:

The opposition Labour Party, backed by other smaller opposition parties, has put forward a motion that states: "That this House has no confidence in Her Majesty's Government."

Labour Leader Jeremy Corbyn will open the debate on the motion at 12pm. Mrs May will also speak in the debate and it will last until 7pm.

MPs will then vote on the motion at 7pm, with the result due at around 7.15pm.

There are 650 MPs in the House of Commons.

Mrs May's government needs 318 votes to win the vote, as seven members of Sinn Féin party do not take their seats at Westminster, four speakers do not vote and four MPs who help count votes, known as tellers, are not counted. 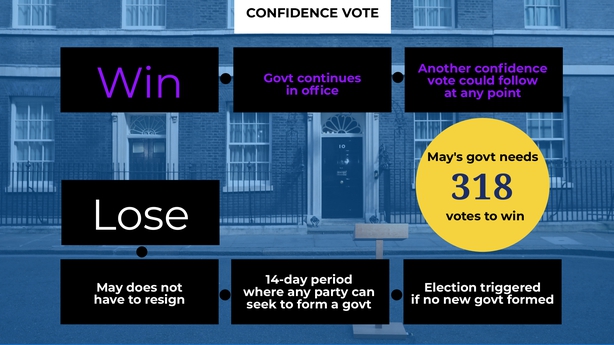 What happens if the government wins?

The government continues in office.

However, there are no restrictions on how soon another confidence vote can be called, so Labour could put forward another no confidence motion at any point.

What happens if the government loses?

Mrs May does not have to resign. A 14-day period is triggered in which any party, including Mrs May's Conservatives, can seek to form a government.

To do this they would have to win a confidence vote in the House of Commons.

If a new government cannot be formed within 14 days, an election is triggered.

What are the chances of May losing?

Theresa May does not have an outright majority in parliament but the DUP, whose ten MPs prop up the Tories in the Commons, has said it will support the government.

So Mrs May would only lose if enough of her own Conservative members voted against the government.

What are MPs saying about the vote?

"We don't want a general election, this is not about party politics" - Pro-EU Conservative MP Justine Greening