Bank of England Governor Mark Carney has said he believes the possibility of a no-deal Brexit is "uncomfortably high at this point".

He said work had been ongoing to ensure that the financial system was in a "robust position" so it "lessens the impact of a bad deal in this case, a no-deal Brexit".

He added a no-deal Brexit is "highly undesirable".

Mr Carney told BBC Radio 4’s Today programme said a no-deal Brexit would mean a "disruption to trade as we know it" and added "as a consequence of that, a disruption to the level of economic activity, higher prices for a period of time".

"We have meticulously gone through the types of risk associated with a no-deal Brexit to make sure the institutions are in a position".

Mr Carney was speaking ahead of a meeting between British Prime Minister Theresa May and French President Emmanuel Macron as she intensifies efforts to win over support in Europe for her Brexit plans.

Mrs May met Mr Macron today at his summer retreat, Fort de Bregancon, on a small island off the French Mediterranean coast.

After the hastily arranged talks, Mrs May joined him for a private dinner. 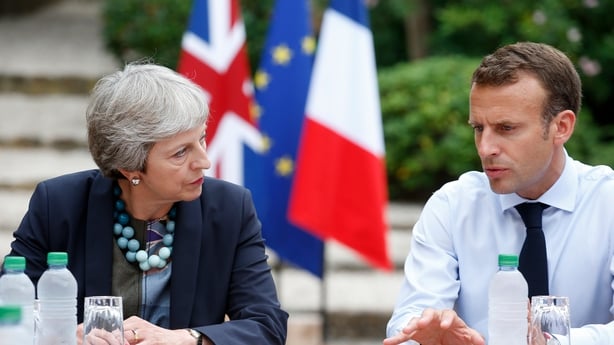 She ended her holiday in Italy a day early in the hope of winning over Mr Macron, one of Europe's key powerbrokers, although she will jet off to Switzerland for a second break later this month.

It comes after Britain’s Brexit Secretary Dominic Raab held talks with his counterparts in Paris yesterday.

But the UK's former ambassador to France, Peter Ricketts, has warned not to expect a Brexit breakthrough in the talks.

He said Mr Macron was "the last person" to want to break ranks with the rest of the European Union to push for a softer stance from Brussels.

Mr Macron "doesn't believe in softening" the position on Brexit as "he is a passionate pro-European", he said.

He said: "The UK knows well the benefits of the single market. It has contributed to shaping our rules over the last 45 years.

"And yet, some UK proposals would undermine our single market which is one of the EU's biggest achievements.

"The UK wants to keep free movement of goods between us, but not of people and services.

"And it proposes to apply EU customs rules without being part of the EU's legal order.

"Thus, the UK wants to take back sovereignty and control of its own laws, which we respect, but it cannot ask the EU to lose control of its borders and laws."