British Foreign Secretary Boris Johnson has said Prime Minister Theresa May must "get on with it" and take Britain out of the European customs union "as fast as is reasonably possible".

The warning came against a backdrop of unease among Brexiteers about the proposed "backstop" arrangement to keep the UK closely tied to EU customs rules if alternative solutions to the border between Ireland and the UK cannot be found.

Chancellor Philip Hammond has acknowledged the two alternative models currently being considered by the British cabinet to provide the basis for a future customs deal were "works in progress".

The backstop proposal, which has yet to be formally set out, is intended as an alternative to the European Commission's plan - rejected by Mrs May - which would see Northern Ireland remain closely aligned with the EU if no other solution is found to keep the border open.

Despite assurances it will be time-limited, the plan has sparked concern that a temporary arrangement may be allowed to become permanent.

Environment Secretary Michael Gove said the arrangement should last no longer than "weeks or months," while prominent Brexiteer Jacob Rees-Mogg accused the government of being prepared to "kowtow" to Brussels.

Mr Johnson left no doubt he wants the UK to quit the customs union as soon as possible.

During a visit to Argentina, he told Bloomberg TV: "The prime minister is the custodian of the plan, which is to come out of the customs union, out of the single market and to get on with it, to get on with that project with all convenient speed, and that is what we are going to do.

"I think it's important for people to have a sense of when it's going to happen and to be able to do it as fast as is reasonably possible."

Spelling out a detailed list of requirements from any deal, Mr Johnson added: "The prime minister has made it absolutely clear that we are coming out of the customs union and we're coming out of the single market and what is entailed by those promises is very precise.

"It means we take back control of our tariff schedules, we set our own tariffs, we run our own commercial policy.

Brexiteers including Mr Johnson support the "maximum facilitation" scheme - known as Max Fac - which would use trusted trader arrangements and technology such as number plate recognition cameras to avoid the need for border checks.

Mrs May is thought to support a new "customs partnership" where the UK collects tariffs on behalf of the EU for goods intended for the bloc, with traders potentially able to claim a rebate if British duties vary. 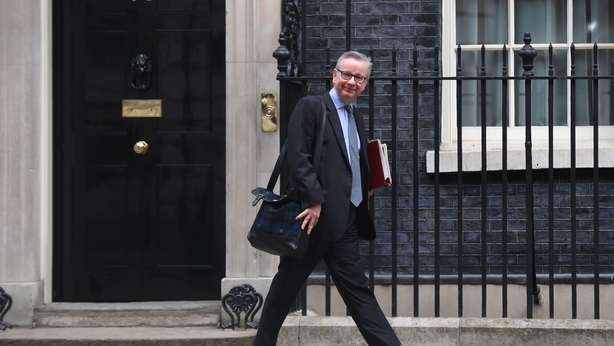 Meanwhile, fresh Cabinet tension over Brexit has been exposed in a leaked letter in which Mr Gove hits out at Mr Hammond, blaming the Treasury for a defeat in the House of Lords.

The Environment Secretary accused the treasury of "short-sightedness" that had led to an "avoidable" Lords defeat for the European Union (Withdrawal) Bill.

Peers voted to force the Government to maintain EU environmental principles and standards after Brexit, the 15th defeat suffered during the bill's passage through the Lords.

In the letter to Cabinet colleagues, which was obtained by the Daily Telegraph, Mr Gove pinned the blame for the defeat on the chancellor's department.

The newspaper reported Mr Hammond blocked plans to give a new post-Brexit environmental watchdog the power to impose fines on the government and local authorities if they fail to meet targets on boosting recycling and cutting pollution.

In the letter Mr Gove wrote: "The short-sightedness of the treasury has now led to an entirely predictable and avoidable defeat on the EU Withdrawal Bill and inflicted a damaging blow to the Government's environmental credentials."