Brexit could see a significant increase in the amount of freight moving between Dublin and mainland Europe, according to the Chief Executive of Dublin Port.

Eamonn O'Reilly was speaking on RTÉ's Morning Ireland ahead of the christening of a new roll-on roll-off freight ship at Dublin.

The MV Celine is the world's largest short sea Ro-Ro ship and will transport freight between Dublin and the continent.

The vessel is 235m long and has a capacity of 8km.

Such is the scale of the ship it would not have been able to dock in Dublin prior to the completion of recent expansion works. 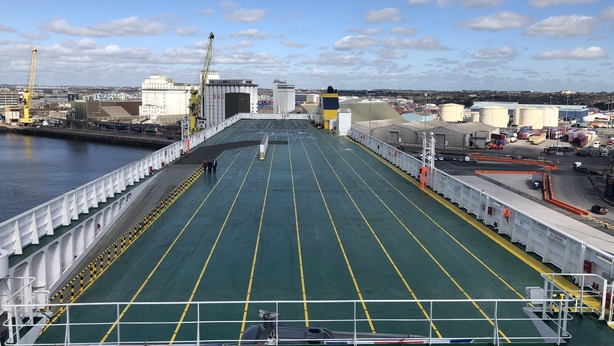 Eamonn O'Reilly said the huge level of uncertainty Brexit presents is matched with shipping companies seeking to give customers certainty that goods will arrive on time.

He said he foresees that a significant amount of freight currently moving from Dublin to Holyhead will change to move from Dublin to Cherbourg, Zeebrugge and Rotterdam.

He also said Dublin Port will build the necessary custom posts and inspection facilities at the port to allow for customs checks in the event of a hard border.

He said plans are in place to prepare for this eventuality

On board the new "Brexit buster" ship at Dublin port. Direct to Zebrugge - worlds biggest Ro-Ro ship - will take an 8km long line of trucks and trailers. pic.twitter.com/vkfMDEQXef