Minister for Foreign Affairs Simon Coveney has said that full alignment with the rules of the European Union's single market and customs union meant that Northern Ireland would enjoy the status quo post-Brexit.

Speaking in Brussels, Mr Coveney said: "We're very clear in terms of what maintaining full alignment with the rules of the single market and customs union [means] in order to maintain north-south cooperation, an all-island economy, and the full implementation of the Good Friday Agreement.

"We're clear what that means.  It means essentially protecting the status quo, and that is what the all-island economy is all about."

Earlier, the European Commission said last week's agreement between the Commission Task Force and the UK in the Brexit negotiations was not "formally speaking" legally binding, but was a "gentlemen's agreement".

Speaking in Brussels, spokesman Margaritis Schinas said it was "fully backed and endorsed by the UK government".

He said: "Formally speaking the Joint Report is not legally binding because it is not yet the Article 50 Withdrawal Agreement, but we see the joint report of Michel Barnier and David Davis as a deal between gentlemen.

"And it is the clear understanding that it is fully backed and endorsed by the UK government.

"President Juncker had a meeting with Prime Minister May last Friday morning to ascertain that this is precisely the case. They shook hands."

Mr Schinas said that on Friday the European Commission had recommended to the European Council, which meets later this week, "to conclude that sufficient progress has been made in the first phase of Article 50 negotiations with the United Kingdom".

He added: "This decision was adopted in written procedure by the College of Commissioners and assesses the Joint Report agreed between the Commission negotiator and the UK negotiator.

"It is now for the European Council on 15 December to decide if sufficient progress has been made allowing negotiations to proceed to their second phase."

At this week's summit, the council will adopt new negotiating guidelines that will determine the beginning of the next phase of Brexit talks.

According to a draft of the guidelines, EU heads of government will underline "that negotiations in the second phase can only progress as long as all commitments undertaken during the first phase are respected in full and translated faithfully in legal terms as quickly as possible".

Britain's Brexit Secretary David Davis has said his comments regarding the deal on phase one of Brexit talks have been taken out of context.

In an interview with the BBC yesterday, Mr Davis said that a pledge on the border agreed between the EU and UK on Friday was "a statement of intent" rather than a legally-binding move.

His comments prompted the Taoiseach Leo Varadkar to say that both Ireland and the EU will hold the UK to the phase one agreement reached on Friday.

This morning, Mr Davis told LBC Radio in London that the media had twisted his words. He said the UK intended to prevent a hard border after leaving the European Union whatever the outcome of Brexit talks.

"What I actually said yesterday in terms was we want to protect the peace process, want to protect Ireland from the impact of Brexit for them, and I said this was a statement of intent which was much more than just legally enforceable," Mr Davis said.

"Of course it's legally enforceable under the withdrawal agreement but even if that didn't happen for some reason, if something went wrong, we would still be seeking to provide a frictionless invisible border with Ireland."

In a brief comment to the media at an event in Dublin today, the Taoiseach said he was very happy with today's clarification from Mr Davis.

Separately, Northern Ireland Secretary James Brokenshire has said the deal struck last week was more than a statement of intent.

Speaking on RTÉ's Morning Ireland, Mr Brokenshire said: "The legal effect is given by way of the withdrawal agreement. 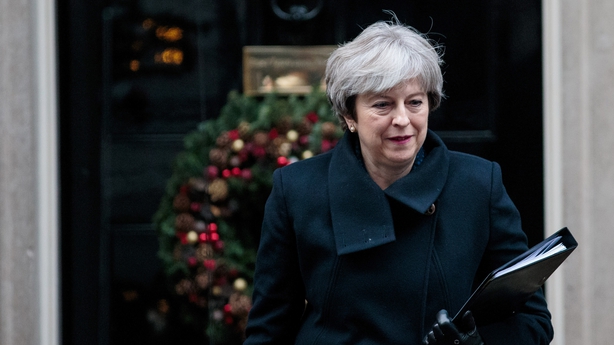 Elsewhere, Theresa May has said Britain's offer for its divorce bill with the EU will be off the table if the UK does not agree a future partnership with Brussels.

The prime minister told MPs the offer, which she said was likely to be between £35 billion and £39 billion, had been made "in the context of us agreeing the partnership for the future".

Labour leader Jeremy Corbyn said the government had scraped through the first phase of talks, as he challenged Mrs May to drop plans to write the date of Brexit into the European Union (Withdrawal) Bill.

Giving a statement to MPs about progress in the negotiations, Mrs May said: "He asked about whether this was conditional on securing a deal.

"If we don't agree that partnership, then this offer is off the table."