The head of the largest group in the European Parliament has said there can be no progress towards the second phase of the Brexit negotiations if Britain does not provide assurances on the border to the satisfaction of the Government.

German MEP Manfred Weber, who is the chair of the centre-right European People’s Party (EPP), has told RTÉ News that the Irish issue is of equal importance to the other key issues of Britain’s financial liabilities and the rights of EU citizens.

"Brexit means [the UK] leaving the European Union. That means for us, as representatives of the European Union, that we are defending from now on the 440 million EU citizens, and [not] British interests. That is very clear and that has to be understood in London as well.

Fine Gael is a member of the EPP.

Mr Weber told RTÉ News that even if there is progress on the issue of Britain’s exit bill and citizens' rights, the EU would not regard the process as graduating to the next phase. 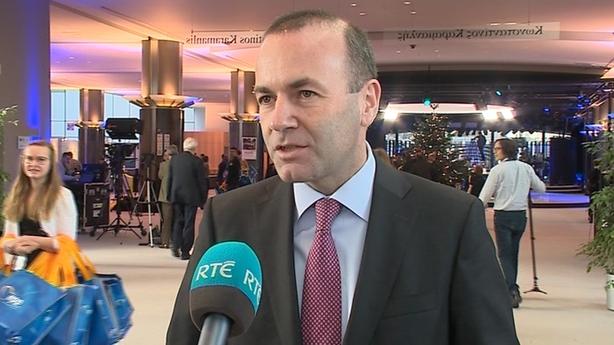 He said: "We have progress on the bill question, so London is putting more money on the table.That’s good. We have progress on citizenship, so that accept that Irish people, Germans, French people who are living in Great Britain are equally treated and can keep the rights they have today.

"But having this progress in mind, I have to be clear that this does not mean that there is sufficient progress. One big question, the Northern Ireland question, is not yet solved.

"We fully support Leo Varadkar, we fully support the Irish Government, that we keep the third point equally important on the table. London must [decide] what they want to do with Northern Ireland. We need clear commitments for the December decision.

"The expectation for London is very clear. We don’t accept a hard border between Northern Ireland and Ireland, and we have to find a solution on a clear commitment about a peace process, the Good Friday Agreement.

"We need a clear commitment from the London side on these points. Then we can talk about sufficient progress.

"But the question of Northern Ireland is still the open question of this first phase of these negotiations and Europe will insist in solving this question before we go to the second phase."

Negotiations between EU, British and Irish officials are said to be intensifying on the Irish question.

A lunch meeting between the British Prime Minister Theresa May and Jean-Claude Juncker on Monday is seen as the deadline for London to come forward with proposals on the three areas.

However, sources have suggested the border issue may take longer.

Tomorrow @eucopresident Tusk meets Taoiseach @campaignforleo in Dublin at 16h to discuss #Brexit and how to avoid a hard border on the island of Ireland. Press point afterwards.

Meanwhile, the DUP has warned Theresa May's Conservative Party against giving too many concessions in the talks on the future border arrangements.

Sky News is reporting that DUP officials met the Tory officials this morning, where they warned that any British commitment on Northern Ireland staying in the single market, customs union or regulatory equivalent "would be deeply destabilising" for the deal they struck earlier this year to keep Mrs May in power.

Elsewhere, Minister for Agriculture, Food and Marine Michael Creed has said Brexit talks are at a critical juncture and it is "squeaky bum time".

Speaking on RTÉ's Today with Sean O'Rourke, Mr Creed said the Irish Government wants what the UK government has articulated it also wants - a frictionless border.

He added that the border is the most complex and difficult issue and it is incumbent on the British government to deliver a roadmap on how this can be achieved.

Earlier, Ian Paisley Junior, DUP MP for North Antrim, has said the Government should be assisting the UK to move forward in its relationship with the EU, instead of "shouting about" the border and the Good Friday Agreement and talking about "doom and gloom".

Speaking on RTÉ's Morning Ireland, Mr Paisley said he would "love to encourage" the Republic to leave the EU, along with the UK but he that respected the decision to stay.

In return, he asked that the Republic respect the decision made by the people of the UK.

He said that people were talking up a problem that did not need to be talked up. However, Mr Paisley warned that any efforts to "trip up" the UK as it left the EU would have repercussions.