Urgent decisions are needed over the impact of Brexit on the border, a committee of MPs said.

The effect on areas such as customs operations will be "severe" without specific solutions to the complex issues affecting the island, the British Home Affairs Committee said.

The border is one of the key issues under discussion during EU exit talks in Brussels.

The committee said: "Decisions on the way forward are needed as a matter of urgency including on infrastructure improvements, systems and capacity"

Witnesses giving evidence to the committee were clear that the Northern Ireland border presents particular challenges for post-Brexit customs arrangements.

In January Jack Semple, policy director at the Road Haulage Association in the UK, told the group of MPs the companies he represented struggled to see how the proposed models for post-Brexit customs arrangements could work on the island of Ireland and that "we cannot see an easy solution".

He said the problem was exacerbated because "the economic integration of trade" between Northern Ireland and the Republic "is at a far more advanced level than it is between the UK and continental Europe".

Meanwhile, members of the House of Commons Foreign Affairs Committee have been visiting Co Cavan hearing of the fears Brexit is creating in border communities.

The Chief Executive of Cavan County Council presented the British MP's with a significant document containing the assessment of Brexit made by 11 local authorities on both sides of the border.

The chairman of the Dail's Foreign Affairs Committee Brendan Smith said he hopes the British government is beginning to get a sense of how concerned Ireland is about Brexit.

"We have to keep working away, raising the awareness and raising the concerns that we have to protect every aspect of the Good Friday Agreement for the benefit of both islands," he said. 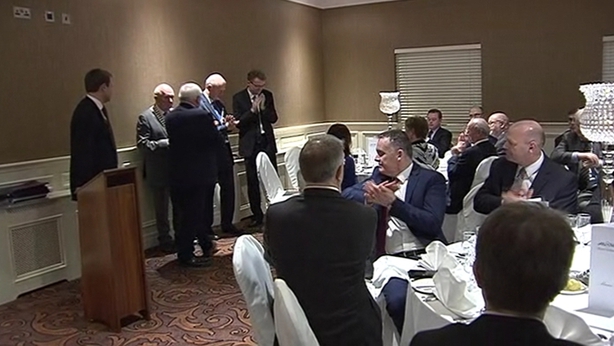 Recently, the UK Brexit Secretary David Davis told the Committee on Exiting the EU that "one of my aims in this is to try to get an outcome that does not do harm to Ireland".

He confirmed that it remained the British government's intention to ensure that there is no physical border and no infrastructure at the border.

He also pointed out that Ireland is the EU country most dependent on the UK for trade with a value of "about a one billion euro a week" in both directions, and through the UK to the continent.

Separately, a leaked European Commission document has suggested that the Republic is now pushing hard for concrete reassurance on the border question ahead of the crucial EU leaders' summit next month at which Theresa May hopes to gain a green light for trade talks to begin.

Along with the question of expat citizens' rights and the UK's "divorce bill", the border is a key issue in the first stage of Brexit talks, on which "sufficient progress" must be made before the leaders of the remaining 27 EU states will give the go-ahead for trade talks.