British finance minister Philip Hammond has sent a thinly-veiled warning to Boris Johnson amid speculation that the Foreign Secretary is trying to destabilise Prime Minister Theresa May, declaring "nobody is unsackable".

Mr Hammond affirmed his "100% support" for Mrs May and denied reports that he had sent a 4am text to Mr Johnson on the night of the general election offering him his support for the leadership.

The Conservative conference in Manchester has been dominated by discussion of Mr Johnson's leadership ambitions, after he set out his own personal red lines for Brexit negotiations and issued a call for higher public sector pay rises.

Former education secretary Nicky Morgan said last night that Mr Johnson "had to go" unless he could show his loyalty to the government, while the British Chambers of Commerce warned that public disagreements between ministers were damaging business confidence.

Mr Hammond acknowledged that uncertainty over EU withdrawal negotiations were causing "a pause in business investment" which was harming the UK economy, and said it was the duty of all cabinet ministers to "pull their weight" in support of Mrs May.

Asked whether Mr Johnson should be sacked, the chancellor told ITV's Good Morning Britain: "We all serve at the prime minister's pleasure and we all owe the prime minister our allegiance and our loyalty within the cabinet.

"I have always operated on the principle that it is probably best to believe that nobody is unsackable. Everybody has got to pull their weight within the government."

Mr Hammond's intervention came as he tried to keep attention on the domestic agenda, with the announcement of £400 million for transport links in the north of England.

£300 million will be used to ensure cities such as Liverpool, Manchester, Sheffield, Leeds, York and Leicester can be linked up with the HS2 high-speed rail route between London and the north.

A further £100 million will go into local road schemes to cut congestion and unlock new sites for homes and businesses in the north.

Mr Johnson expressed surprise that his article stating the Brexit transition period should last "not a second more" than two years had overshadowed the first day of the Manchester conference, squeezing out Mrs May's attempts to make a pitch to younger voters.

He told the Daily Telegraph: "I think, actually, if you studied what I said, it was basically government policy. I think it's extraordinary that so much fuss has been made about repeating government policy, but there you go."

Mr Hammond flatly denied reports that he had offered Mr Johnson his support as leader in an early-morning text as the disastrous results of the 8 June election became clear.

Although he was in text and phone contact with cabinet colleagues during the night, he told Good Morning Britain: "I did not text Boris Johnson during that morning and offer him my support."

He added: "The prime minister has my 100% support. She has indicated that she intends to fight the next election as leader of the Conservative Party. If she does so, she will have my support." 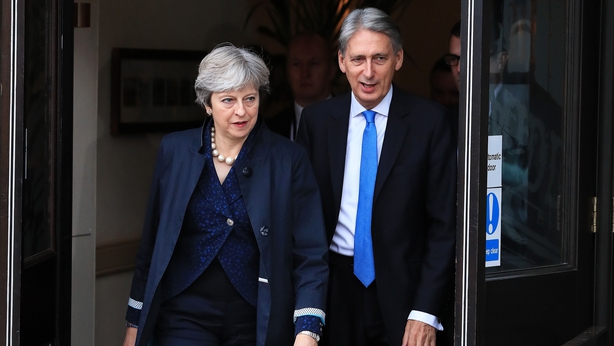 Mr Hammond said ministers were "frustrated" at the pace of progress in Brexit negotiations and acknowledged the process had damaged business confidence.

"One of our challenges in the UK is the short-term uncertainty that the EU exit negotiations have created, causing a pause in business investment," he said.

"That's the reason we want to accelerate the process, that we want to agree an interim period with the EU, so we can get some business certainty back into the environment, so businesses can start investing again and we can get our economy pulling forward."

The director-general of the British Chambers of Commerce, Adam Marshall, said businesses wanted a transition period of at least three years, and called for an end to government infighting over Brexit.

"Public disagreements between Cabinet ministers in recent weeks have only served to undermine business confidence, not just on Brexit negotiations but also on the many issues where firms need to see clear action from government closer to home," he said.

Mr Hammond is due to use his keynote speech to the Manchester conference to come to the defence of the free market economy which came under attack by Jeremy Corbyn in Brighton last week.

Rejecting the Labour leader's claim that the neo-liberalism which has dominated the past 40 years has failed, Mr Hammond will tell delegates that the market economy remains "the best system yet designed for making people steadily better off over time and underpinning strong and sustainable public services for everyone".

His announcement of extra cash for the Northern Powerhouse region follows accusations from figures including Greater Manchester Mayor Andy Burnham that the project has fallen off the government's agenda since the departure of its originator, George Osborne.

Mr Hammond warned that the appearance of disunity at the top of the government was harming Britain's negotiating position in Brussels.

"The more we can show unity, the stronger our negotiating position in the EU would be," he told Sky News.

"[Brexit Secretary] David Davis is doing a great job in Brussels, but his hand would be strengthened where it is clear that he has a united government behind him and a clear position."

Hailing Mrs May's performance as prime minister, Mr Hammond described her as "a cool head", adding: "She listens to her colleagues in cabinet, she formulates the position which will deliver the best deal for Britain and when the time is right, she will go into bat for Britain with her head of government colleagues across the rest of the EU."

He said he was hopeful that Mrs May's Brexit speech in Florence last month would help move the negotiation process on to the next stage, dealing with the future UK/EU trade relationship.

"Boris is Boris and his views on this subject and others are well known," Mr Hammond told BBC1's Breakfast.

"But the government's policy is also clearly set out by the prime minister in her Florence speech and we are making steady progress to unsticking the process in Brussels, where we have been in a sort of holding pattern over the summer months."

Mr Hammond said the whole cabinet had signed up to the position set out by Mrs May in her Florence speech when she proposed a transition period of "around two years" after Britain leaves the EU.

He dismissed Mr Johnson's insistence that the transition should last "not a second more" than two years as a "rhetorical flourish".

"We had a cabinet discussion before the speech and the whole cabinet signed up to that position. That is our position," he told BBC Radio 4's Today programme.

"The prime minister was very precise in what she said. At the moment that points to a period of around two years. I think that gives us some flexibility."