Hundreds of anti-Brexit campaigners have taken part in a number of demonstrations along the Irish border in opposition to Brexit.

The anti-Brexit protests organised by the Border Communities Against Brexit group and Sinn Féin were held to mark Britain leaving the European Union.

Around 200 people gathered near Newry to voice their opposition to Brexit.

Standing close to the border, Co Armagh sheep farmer Seamus McDonnell said that communities have been left in limbo by the uncertainty following the split.

The anti-Brexit campaigner, who farms on both sides of the border, said many people in local communities were against Brexit.

He said: "We will be left in limbo here for the next 11 months because we don't know if there will be a hard border, soft border or no deal. No one knows. I don't think Boris Johnson knows yet.

"We are out of Europe and I think in a few months time it will totally take effect.

"We may have a free-flowing border now but it (the end of the transition period) will make a big change. You have a big dread and we don't know if we will be able to continue what we're doing."

"This part of Ireland did not consent to Brexit, we voted significantly to remain within the EU and we are being taken out of the EU without consent," the Sinn Féin representative said.

"People are very fearful of all the consequences of this, we know we weren't in any way in consideration by the British government or the people in Britain when they voted for Brexit.

"There are a lot of concerns from people as to how this will unfold.

"People in the Government in the south (Republic of Ireland) need to be very vigilant that the protocols that have been agreed by the British government are followed.

"We do not want to see a hardening of the border." 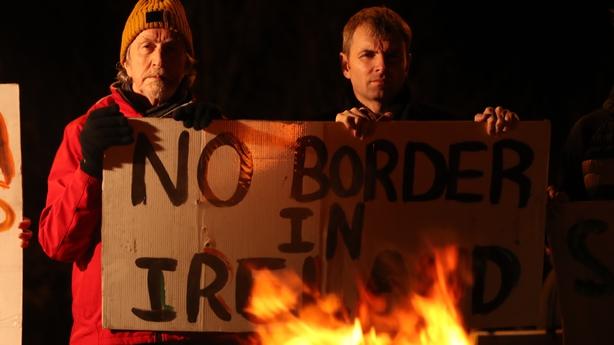 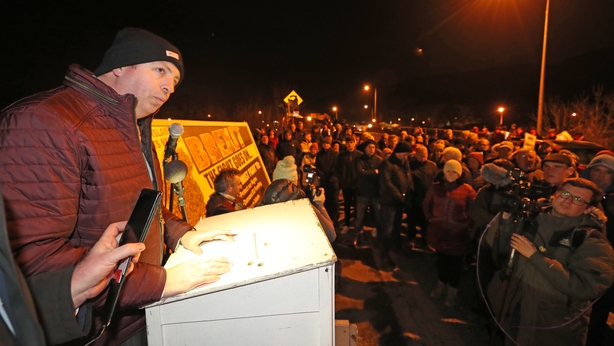 The anti-Brexit campaigners also demanded for Northern Ireland to continue to have a voice in the EU after the UK leaves.

In an earlier protest, Border Communities Against Brexit activists unveiled a new billboard declaring the "fight goes on".

They urged the Irish Government and the restored Stormont Executive to push for some form of continued representation in EU structures.

It comes as the region's three MEPs leave the European Parliament ahead of Brexit.

Border Communities Against Brexit expressed relief that a hard border with security check points appeared to have been avoided but warned the process was not over and there remained the risk of a damaging no-deal on trade.

Speaking on the Northern Ireland side of the border, campaigner Declan Fearon said: "Today we meet all the parties at Stormont and one of things we would like to impress upon them is the urgent need for both the Executive in Stormont and the Irish government to address the issue of representation for communities.

"We are entitled to be represented in Europe, we are still part of the single market, we should have that representation at the table, even in an advisory role.

"We have actually spoken to Mr Verhofstadt (former Brexit co-ordinator for the European Parliament Guy Verhofstadt) and members of the European Union on that issue and he said they had absolutely no problem whatsoever in allowing that to happen.

"It's up to the Irish Government especially and indeed to the new Executive at Stormont to make sure that they push for that to happen."

Mr Fearon said people living in Northern Ireland would be "poorer" as a result of lost EU funding and their children would be denied opportunities enjoyed by young people living in the Irish Republic, such as the ability to study in the EU.

"We are concerned for the people who live here and the difference there will be in the rights people will have from 50 yards on the other side of the border to where we stand now," he said.

The campaigners were joined by senior Sinn Féin figures this morning on the Armagh/Lough border, among them party leader Mary Lou McDonald, her predecessor Gerry Adams and vice-president Michelle O'Neill.

Ms McDonald said: "Today is a very sad day. People in the North did not consent to Brexit.

"This is not something that people on the island of Ireland want, bar a small minority."

She praised the work done to avoid the return of a hard border but added: "The job isn't done. Brexit is a game-changer, it's not a one-off event, it completely recasts and reshapes the political and economic conversation across the island, between the island of Ireland and Britain, and right across the continent.

"So this isn't an end point, this is very much a beginning."