Talks to save power-sharing in Northern Ireland are set to extend beyond Easter if, as expected, a deal fails to materialise tomorrow.

A full day of negotiations is planned between the five Stormont parties and the Irish and British governments tomorrow but, after that, discussions will be wound down for the holiday period, sources close to the process have said.

Good Friday had been seen as a working deadline for an agreement to form a new coalition government.

But with consensus still a long way off, it is understood participants wanted to avoid the symbolism of a breakdown on Friday and the inevitable unfavourable comparisons with the Good Friday peace agreement of 1998.

Northern Ireland Secretary James Brokenshire had warned he would start formulating legislative steps to either restore devolution or take responsibility for some devolved financial matters over the Easter weekend.

It will take a period of time to bring law changes through parliament, offering another short window to reconvene talks next week.

Sinn Féin leader Gerry Adams has suggested Good Friday is not make-or-break for his party.

"We are quite relaxed about the British Secretary of State allowing a little bit of extra time for things to be sorted," he said.

However Mr Adams warned the DUP it was "decision time" on whether they want to restore power-sharing.

He made it clear that republicans would only strike a deal to form a new administration at Stormont if the DUP gave ground on a series of "rights-based" issues. 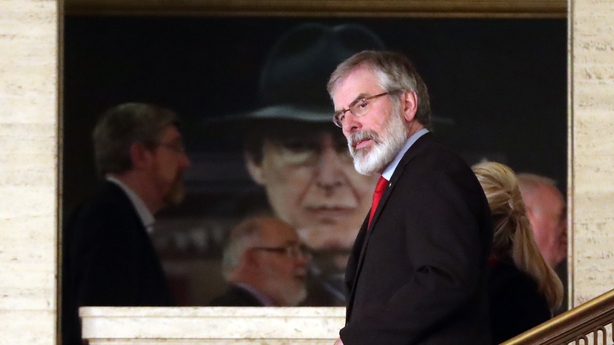 Mr Adams claimed the majority of people in the region wanted movement in terms of protection of Irish language speakers and the legalisation of gay marriage, but the DUP was standing in the way.

The Sinn Féin president also questioned the main unionist party's level of engagement in negotiations to save devolution, claiming they had only met his party for bilateral leadership talks twice in four days.

"The question for the DUP is very, very simple - do they want to be part of the leadership of a rights-based society or not?" he said.

Mr Adams' claims were rejected by DUP negotiator Jeffrey Donaldson. The Lagan Valley MP said Sinn Féin was "trying to cover their back and trying to prepare the way for yet another walkout".

"They are rapidly becoming the party that walks out on the other parties.

The two parties are involved in set piece talks at Stormont Castle, Belfast, with the three other main parties - the Ulster Unionists, SDLP and Alliance - and the two governments.

However, given the DUP and Sinn Féin's position as the two leading parties, devolution can only be restored if they can agree.

As well as an Irish language act and a commitment from the DUP not to block same-sex marriage, Sinn Féin want to see a Bill of Rights as outlined in the 1998 Good Friday Agreement introduced and the re-establishment of a forum to allow civic society to contribute to the political process.

Sinn Féin is also at odds with the UK Government on how to deal with the legacy of the Troubles.

Mr Adams said his party would reluctantly countenance going back into power-sharing without movement on legacy logjams, as they were not devolved issues, but he said that would not be ideal.

With regard to face-to-face leadership talks with the DUP, Mr Adams said there had been one meeting last Thursday and one on Monday.

"That is not the best use of time," he said.

He added: "We went looking for the DUP yesterday (Monday) evening and they had left."

Devolution crashed in January over a row about a botched green energy scheme.

The subsequent snap election campaign laid bare the other disputes dividing the DUP and Sinn Féin.

The DUP, however, claims what Sinn Féin is asking for represents new and unreasonable demands.

Parties missed a deadline to get a government up and running within three weeks of March's Assembly election.

Earlier on Tuesday, representatives from business and civic society journeyed to Stormont to deliver an open letter to Parliament Buildings calling on politicians to put aside their differences.

UUP leader Robin Swann said there was a need for a "change in tempo" in the talks.

"The two big parties need to realise there is more to life than what happens in the Stormont bubble," he said.

The Alliance Party has warned that power-sharing is being put at risk by vanity-motivated politicians refusing to compromise on minor issues.

Leader Naomi Long said sticking points preventing a deal to save the institutions paled in comparison to the major obstacles overcome during the peace process.

"What we have here is far too precious to simply squander because of vanity projects of individual parties," she said.