Sinn Féin leader Gerry Adams has said the "perpetual unionist majority" at Stormont has been "demolished" following the result of the Northern Ireland Assembly election.

A jubilant Mr Adams said it was a "watershed" moment after his party closed to within a solitary seat of the Democratic Unionist Party.

He also said Sinn Féin's new leader in the north, Michelle O'Neill, will be holding talks with Taoiseach Enda Kenny and British Prime Minister Theresa May about the impact of Brexit on Ireland, north and south, over the next few weeks.

Counting of votes concluded early this morning and it is expected that efforts to form a power-sharing administration will begin early next week.

Speaking outside the party's West Belfast office, Mr Adams said Sinn Féin wants to quickly engage in a process with other party leaders to ensure power-sharing in the region is restored.

But he again insisted that the party will not support DUP leader Arlene Foster as Northern Ireland's first minister until she has been cleared of any wrongdoing related to the Renewable Heat Incentive (RHI) scandal.

However, it could leave the executive in limbo for up to a year, as it emerged that the inquiry into RHI will not supply any preliminary findings to speed the process along.

"There is a need for this inquiry to come to conclusions before we can nominate (Arlene Foster) for a position of first minister," said Mr Adams.

We will not be consenting to Arlene Foster being first minister until this issue is cleared up."

Ulster Unionist leader Mike Nesbitt announced his resignation after a poor showing, while Ms Foster last night said that her position as leader of the Democratic Unionist Party was not in question.

The nationalist SDLP also fared better than many expected, replacing the UUP as the third-largest party in the Assembly.

The results may be rendered moot if the main parties fail to strike a deal to form a new power-sharing executive within three weeks.

If that deadline passes, the British government would be obliged to call yet another snap election, but it may instead opt to put Stormont in cold storage and reintroduce direct rule.

The DUP emerged with 28 seats, Sinn Féin has 27, SDLP 12, the UUP 10, the Alliance Party eight, the Greens two, People Before Profit one, the Traditional Unionist Voice one and one Independent Unionist.

That leaves 40 unionists and 39 nationalist/republicans, with the remainder of the 90 MLAs affiliated to neither tradition. 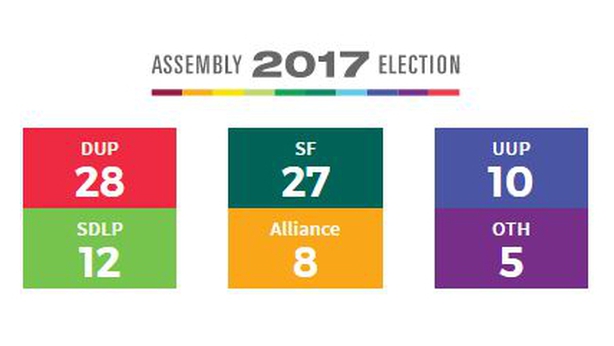 Speaking on BBC Radio Four's Today programme, she said: "The law at the moment requires a fresh election after three weeks if there is no coalition formed. And so I think it will be important for the secretary of state to have legislation ready to give the parties more time.

"I think it would be a pity if they were launched back into yet another election just after three weeks."

What factors led to this outcome?

I would say it was three main reasons.

The first was Arlene Foster's behaviour. People saw it as provocative and I think it energised nationalists. I think they felt insulted by some of the calls she made. I also feel that her inability to deal with the RHI scandal also lost her some support within her own ranks.

The second factor was Brexit. Brexit has energised and worried a lot of the electorate in NI. When people talk about the big turnout on Thursday, it was almost like the referendum on Brexit. And in that referendum, the DUP was on the wrong side of the majority. The majority of people in Northern Ireland actually wanted for the UK to remain in the EU.

The third factor, one maybe not spoken about, but I think it was a response to the behaviour of Sinn Féin's Martin McGuinness and the way he had carried himself. To a lot of people, McGuinness is a Michael Collins-like figure. Those images of him in ailing health, coming up to be respectful to the institution, but also showing that he – who had turned the cheek so many times - had lost patience. I think there was a sympathy and empathy with him. I think that was a very strong influential factor in the nationalism turnout.

Now that the 90 seats are filled, what is likely to happen next? Tommie Gorman reports #AE17 pic.twitter.com/cS9SyV1pJW

The DUP has such a difficult choice to make now. Sinn Féin is suggesting it will not accept Arlene Foster as first minister.

So does the DUP blink and give into Sinn Féin demands that Ms Foster step aside for up to 12 months, because that is how long a public inquiry into the RHI scandal would take. Or does the DUP hold tight?

In that situation, Sinn Féin has a choice to make. Does it go along with the DUP, does it blink or does it say "no deal"? And that means direct rule.

The NI election is also feeding into the bigger political picture already.

This month, British Prime Minister Theresa May will trigger Article 50, the formal mechanism for leaving the EU. I think she will delay doing that until the end of March now, because all of this Northern discussion is going to reach boiling point in those final days of the month. I would say the British government desperately wants to see devolution restored here.

I think it is also going to feed into politics in the Republic. After seeing Sinn Féin behave so effectively in Northern Ireland, I would say Fianna Fáil would be reluctant to trigger an election and take them on in the Republic once a new Fine Gael leader is in place.

Turnout hit its highest level since the year of the Good Friday peace agreement, with almost two-thirds of the electorate voting in Thursday's poll.

The number taking to the ballot boxes swelled to 64.78%, ten percentage points higher than last year's Stormont poll. A total of 812,783 votes were cast. 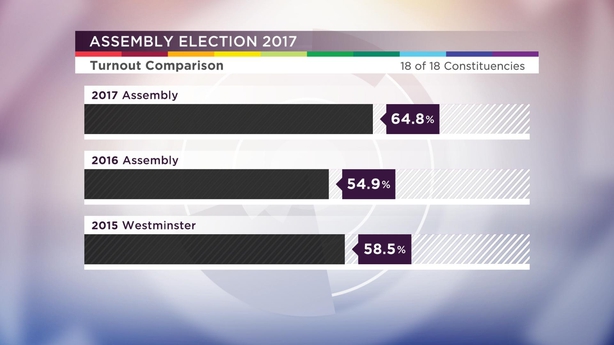 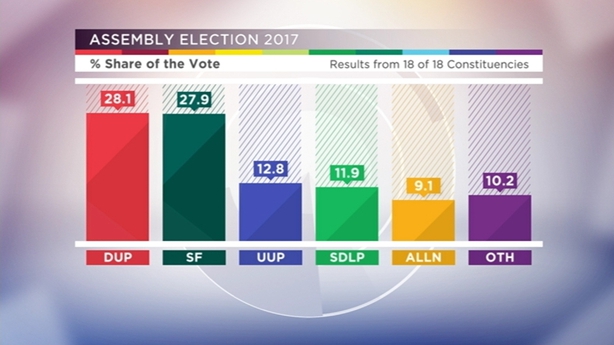 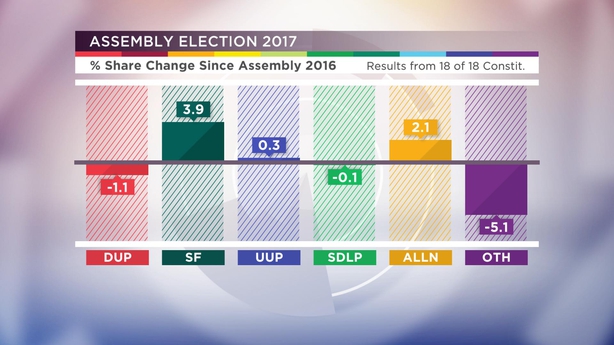 The last coalition executive led by the two largest parties at Stormont - the Democratic Unionists and Sinn Féin - collapsed in January, only eight months after last May's election.

They fell out over the unionist party's handling of a botched green energy scheme and are also at odds on a host of other issues.

However, in those circumstances, the British government may pass emergency legislation to suspend devolution for the first time in ten years ahead of more lengthy negotiations.

While the Assembly ballot will not change how Theresa May's government treats talks to leave the European Union, the border between Northern Ireland and the Republic is a key Brexit issue.