More than 800 South Korean couples were livestreamed having sex in love motels, Seoul police said in one of the largest-scale and most intrusive examples yet of the country's spycam epidemic.

The hyper-wired South has been battling the increasingly widespread proliferation of so-called "molka", or spycam videos, which largely involve men secretly filming women in schools and toilets, among other places.

The latest case is unusual for involving couples and the livestreaming element.

According to police, four men installed tiny cameras - all of them with a lens just one millimetre wide - in 42 rooms in 30 motels, hidden inside hairdryer holders, wall sockets and digital TV boxes.

They then livestreamed the footage 24 hours a day to a subscription website with some 4,000 members, hosted on a server overseas.

More than 800 couples were shown on the site over three months, mostly having sex, police said.

"About 50% of the 1,600 victims are male," an official from the National Police Agency told AFP.

The gang earned seven million won from the scheme, he said, adding that two suspects had been arrested and two more were being investigated.

More than 5,400 people were arrested for spycam-related crimes in South Korea in 2017, but fewer than 2% were jailed. 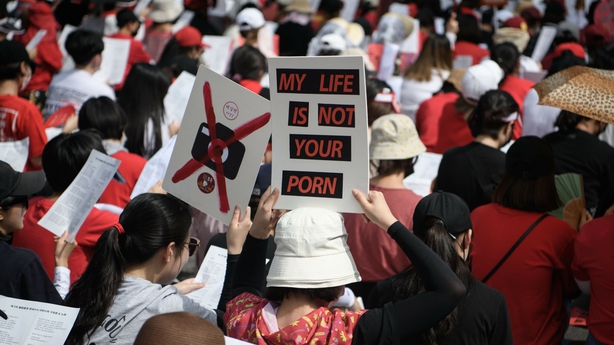 In South Korea, motels are a relatively affordable option for many travellers from home and overseas, and a popular destination for couples seeking privacy away from parents or other family members.

But they have also long been associated with illicit sex business and crime.

In response to the livestreaming case, a woman from Uruguay tweeted: "Now I won't feel safe, literally anywhere" in South Korea.