If you travel by tram to the working class town of Oldham, you will pass the ruins of an old mill that ceased cotton spinning in the 1950s.

The red bricked corpse of a building is now a magnet for antisocial behaviour, and stands as a decaying relic of a bygone era in the north of England.

Oldham is just half an hour outside of Manchester city centre, where the Conservative party holds its national conference this week, the first with Boris Johnson as leader.

In the 1900s, Oldham was an international hub for textile manufacturing, it was known as "king cotton".

Employment was so plentiful there, that workers were rapidly recruited from southern Asia to meet the shortfall, and to feed the boom.

But by the mid 20th century, Oldham's textile industry had fallen into decline, and the mills were closed, leaving behind a large immigrant community, and high levels of unemployment.

Three years ago, the Office of National Statistics in the UK found that Oldham was the most deprived town in England.

In the same year, 60% of the people of Oldham voted to leave the EU.

"People lost their jobs and livelihoods and no one cared. There used to be nearly 700 stalls in this market, and it was very, very active, and then the supermarkets came, and the stalls disappeared."

He believes a return to past glories, can be achieved by leaving the EU.

"We used to have not just cotton mills, there was mining, steel mills, foundries, there was a hell of a lot of work."

"We’re restricted because of the European governing bodies, which is wrong ... there will always be people who will want to buy British."

It is a view shared by Susan, a retired school worker who cites Boris Johnson’s well worn phrase "lets get Brexit done".

"We need to get on with our lives, and be a great England again," she says.

When asked what being a "great England" actually means she looks to the past.

"We had cotton mills, we had steel, we had everything, and now we’ve got nothing. It’s all been put abroad and we need it back.

"We used to be a great nation, and now we’re not. All the other countries are laughing at us, they think we’re idiots. We need to get it back, just get on with it."

Oldham like most of Manchester is predominantly a Labour party supporting town.

The leader of the council, Labour Cllr Sean Fielding, says it is a difficult situation for Labour remainers to handle.

"Lots of people are quite frustrated that three years after a referendum we are no further on from either delivering the result of the referendum or settling it once and for all," he says.

So could Labour voting leavers have their heads turned by a prime minister who speaks the same "Let’s get Brexit done" language as they do, and promises to deliver the results they want?

"There’s a strong feeling that somebody quite tough and dogged is going to be needed to sort out this Brexit situation," says Damian Flangan, chairman of the Manchester Withington Conservatives.

"People think Boris Johnson is the best person to deliver this."

Flanagan also believes the Irish media has been unfair in its portrayal of Brexit as "an exercise in folly, and the rise of English nationalism."

"I think that’s really unhelpful because I don’t think that really understands a very legitimate desire in Britain that we want to leave the EU because we the British people have decided they don’t want to be in that organisation." 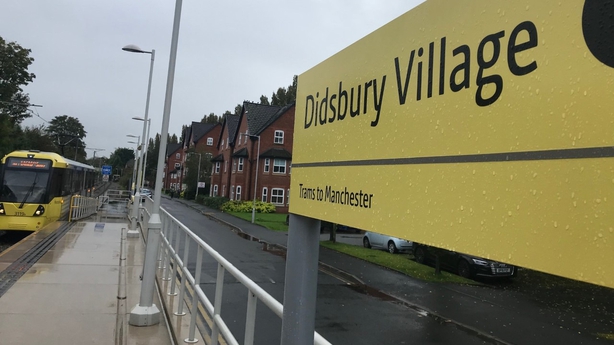 Over in Remain voting Didsbury, a middle class village to the south of Manchester city centre, there is weariness among the electorate over the amount of political energy expended on Bexit over the last three years.

David, a schoolteacher who works in the area, says Europe now thinks Britain is "a laughing stock".

"They’re laughing at us and we should really be a leading light in the world in the areas of tolerance and respectful democracy and we’re not showing ourselves well in that light," he says.

"It is very difficult to actually see how we can now return to the EU in the current climate, it’s actually an embarrassment, so at this stage it’s probably better pragmatic to leave."

Back in the city centre, police erect a ring of steel around Manchester Central Convention Complex, where the Tories will hold their shindig this week.

For the next few days, the eyes of the delegates will be on the new leader, to assess his ability to turn hardline Brexit rhetoric into votes.

"He knows he was elected by a membership that was extremely hard line on Brexit, and he has to get through his first conference as their leader," says Rob Ford, professor of politics at the University of Manchester.

"So it could be a case of seeking to throw out some red meat to the faithful, then get through the conference intact, and that’s the point where you make your move and seek a compromise," he says.

However, he warns that any compromise, if it comes at all, will be probably come at the very last minute, and after a great deal of parliamentary volatility.

Or, he concedes, it’s possible that the prime minister could make a late push to try to exit with no-deal.

"So buckle up," he warns, "because things are about to get a lot more chaotic."