The Government's contingency action plan for a no-deal Brexit includes a range of proposals for sectors across the economy.

The plan is nearly 60 pages long, includes a further 50 pages of annexes, and covers what action would be taken in 19 sectors in the event of a no-deal Brexit.

Here are the sectors identified in the report and an outline of what is planned by the Government in the event of a no-deal Brexit. 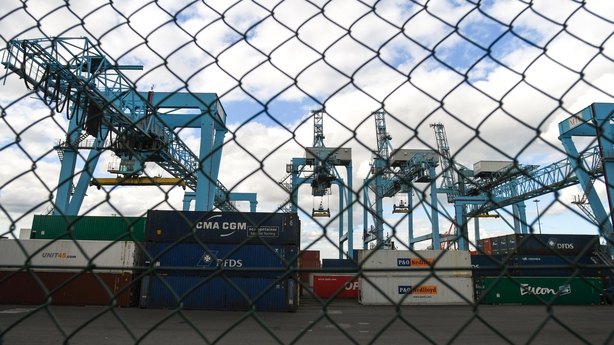 The plan says the Government is committed to minimising any potential disruption from additional checks.

At Dublin Airport, a border control post is required for veterinary and forestry checks and will include seven inspection rooms as well as ambient, chilled and freezer storage areas. A public reception, office accommodation and ancillary facilities are required for 20 staff.

The plan states that €4m has been put toward the recruitment of additional staff to carry out the greatly increased volumes of import controls and export certification arising from Brexit.

It says 200 new staff will be trained in for when the UK leaves the bloc.

It also says that in the event of a no-deal Brexit, the redeployment of existing staff, using models such as those put in place for the response to Foot and Mouth Disease, will be considered.

It is proposed that legislation be grouped into a small number of omnibus bills, focused on protecting the citizen, and supporting the economy, enterprise and jobs, in order to get through the Oireachtas quicker.

Ministers have been asked to identify all non-Brexit legislation essential for enactment before the end of March so the parliamentary schedule can act accordingly.

The European Commission has tabled 14 legislative preparedness proposals for measures that must be adopted whether or not there is an orderly Brexit.

The plan says the Central Bank has the statutory responsibility for financial stability, and is working with financial services firms to ensure that contingency plans are in place for Brexit, in order to minimise the impact on customers and markets.

It expects firms to ensure they have robust contingency plans in place to minimise the impact on customers, investors and markets.

The European Commission has said a "limited number" of legislative measures are required to protect the financial stability of the EU.

Financial services are being actively encouraged to inform clients about the steps that they have taken to prepare for Brexit. 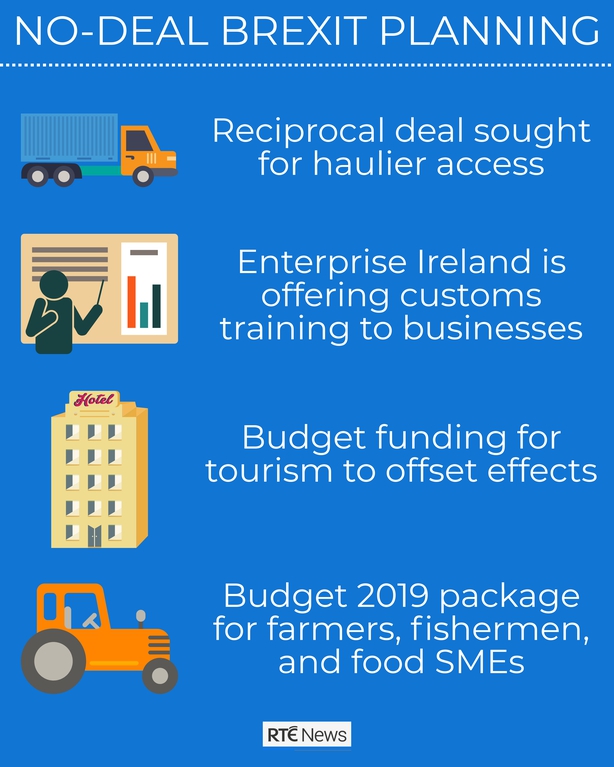 The European Commission has committed to bringing forward a proposal which will set out in legal terms how the current programmes will continue in a no-deal scenario.

The plan states that the work required to maintain the Common Travel Area and its associated reciprocal rights and privileges is at an advanced stage to ensure that all necessary provisions are made in both jurisdictions so that it can continue to function effectively.

The plan says measures are being prepared to ensure that Ireland has a viable extradition system with the UK, and that the continuing exchange of law enforcement data is maintained in a manner compatible with EU instruments on data protection.

The changes required to manage East-West trade flows in a no-deal Brexit will require a concerted response, the plan states, and that while preparation helps, there will be "initial disruption". 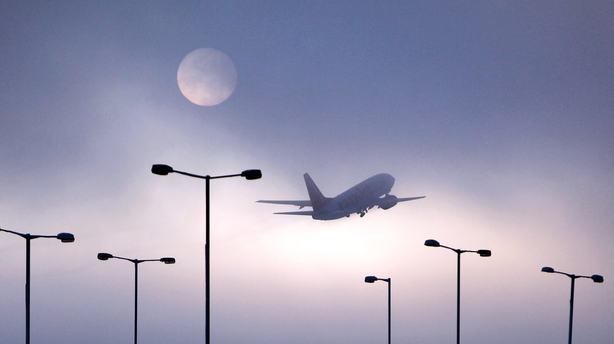 EU law says air carriers must be majority owned in the EU to meet European aviation rules. In Ireland the National Civil Aviation Development Forum was established in 2016 to facilitate engagement between the Government and the air transport sector in Ireland - from airports to aircraft leasing to airlines. It has held regular discussions on Brexit which have informed the Government’s approach to the negotiations with the EU on preparing for Brexit.

The Commission is taking action to ensure that passengers and their baggage flying from the UK and transiting via EU27 airports continue to be exempted from a second security screening, by applying the so-called "One Stop Security" system. 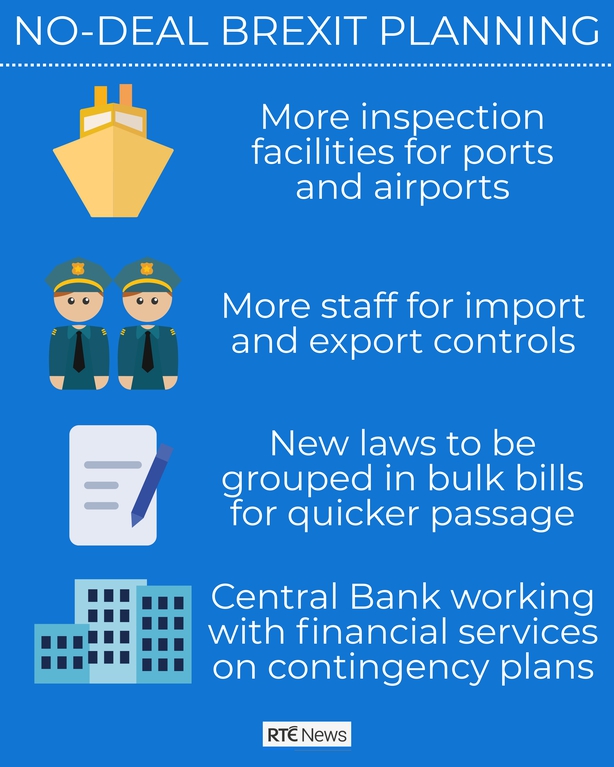 In a no-deal scenario it is anticipated that the Landbridge though the UK may be subject to severe delays. Dover-Calais has been identified as a particular bottle neck. This will have a knock on impact on goods travelling to/from Ireland and the rest of the single market. The Department of Transport says it is engaging with shipping companies to explore new connectivity and capacity options in response to Brexit.

Ireland, along with other EU Member States, previously identified this as an area of significant concern. In a no-deal scenario road haulage between the EU and UK would be severely restricted and limited to an international system of limited quotas. The European Commission proposes allowing UK hauliers access to the EU on the understanding that measures to allow EU hauliers access to the UK would be put in place.

Enterprise Ireland is offering customs training. The course aims to help businesses understand the key customs concepts, documentation and processes required to operate post Brexit. The course aims to provide participants with a firm understanding of customs, the implications for their business and the options from Revenue available to make the customs process more efficient. 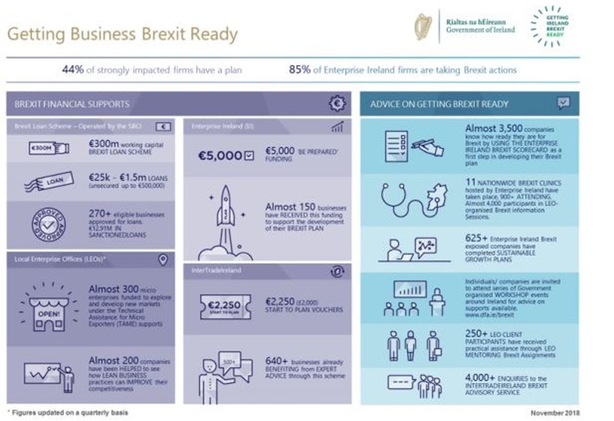 The Government says there is an extensive range of outreach and supports for firms to ensure preparedness for a no-deal Brexit. They have all been publicised through its Getting Ireland Brexit Ready public information campaign.

The central focus of engagement with the sector to date has been around business concerns and preparedness regarding potential supply-chain disruption. The Government says the retail and wholesale sector is already availing of Brexit supports available, including the Brexit Loan Scheme and will be eligible for the forthcoming Brexit Future Growth Scheme announced in Budget 2019. In September, a new pilot Online Retail Scheme was introduced in conjunction with Enterprise Ireland aimed at enhancing the strategic online capabilities of SME retailers.

Budget 2019 provided for the largest increase in the tourism budget in 15 years and included €7m for current tourism funding to offset Brexit. 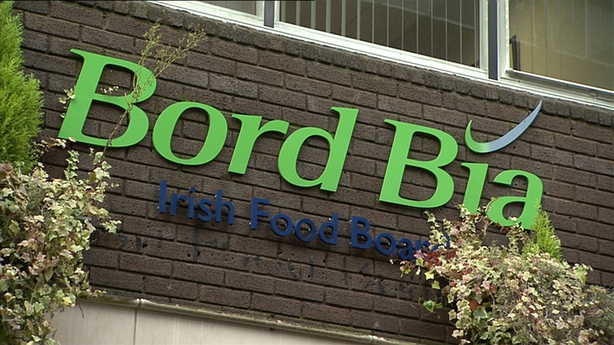 The plan states that funding to Bord Bia has been increased under the last three budgets to help boost marketing and food promotion. This has been complemented by successful trade missions to the Gulf Region, China, Canada, the US, Mexico, Japan, Korea, Malaysia and Indonesia, it adds. In Budget 2019, the Minister introduced a €78m Brexit package for farmers, fishermen, food SMEs and to cover additional costs related to Brexit.

Work is ongoing with pharmaceutical wholesalers to risk assess product that may be vulnerable as a result of a no-deal Brexit and put in place the necessary measures to ensure continuity of supply.

The transfer of personal data to the UK will be subject to the rules on international transfers set out in the GDPR and other relevant EU directives and regulations.

The Commission has set out a relevant "toolbox" available within GDPR for a no-deal Brexit. It includes "appropriate safeguards" (approved standard contractual clauses, binding corporate rules) that can be used.

The plan says that businesses and public sector organisations which currently share personal data with organisations based in the UK should assess their current arrangements and ensure that they will be GDPR compliant.

On energy, the Government has said it is engaging "intensively" with the EU on the issue of the all-island Single Electricity Market, which is underpinned by EU legislation.

On gas trading, Ireland-UK gas trade will not fundamentally change in the short-to-medium term, though clarification is needed on certain issues.

The electricity and gas trading contingencies are being examined as part of an ongoing engagement with DG Energy and the EU Commission.