Almost 60% of private sector workers in Ireland have made no provision for their retirement. That means they will have to live on the State pension. At €12,000 a year, this is effectively the poverty line.

With an ageing population, there will be fewer workers to support State pension provision as well, making a bad situation worse.

Census 2016 showed there were almost 638,000 people over 65 years of age in Ireland. This is a 19% increase in five years. The ageing population is a problem of right now.

To try to address the pension coverage problem in the private sector (public sector workers are almost entirely covered by some form of additional pension scheme), the Government has decided to move to a system of automatic pension enrolment: when it gets going, every worker will be automatically registered in a pension scheme, into which they will contribute a percentage of their earnings. They will have a facility to opt out – a consideration for those facing affordability challenges.

But automatic enrolment overcomes one of the biggest barriers to more widespread pension provision – inertia. Pretty much everyone knows that saving for a pension is a good idea. And pretty much everyone knows that the earlier you start, the better. But knowing this and doing something about it is not the same thing. Hence the big gap in pension provision in the private sector.

But if you are automatically enrolled in a pension scheme on joining an employer, the choice is out of your hands. You are in, and most just forget about it – it is no longer an issue. Best of all, there is no paperwork – an important consideration for lower paid manual workers, who are the most likely to have no additional pension coverage (while white collar workers, who fill forms on a daily basis, with second homes and good salaries almost all have pension savings as well).

All this is well-known to behavioural economists, who have proven over and over again that if you want to get someone to modify their behaviour, one of the best ways is to make it easy for them to do so. An automatic opt in to a pension scheme is one such way.

The British have moved in this direction (David Cameron was a fan of behavioural economics), and introduced auto-enrolment in late 2012. It was phased in and all employers are due to be part of the scheme this year. When it started, 47% of workers were part of a pension scheme. After just four years of operation, the number covered has gone up to 66%.

Inertia now works in the opposite direction in Britain. Although workers have the right to opt out of making a pension contribution, very few chose to go to the bother of filling in the forms to do so. In 2016, the evidence suggests only 7% made the active choice to opt out of coverage.

Chartered Accountants Ireland has just published a document for members arguing in favour of the introduction of an automatic opt in scheme here. CAI even asked the membership what they thought, with 97% saying there were concerned about the pension situation and 91% said some form of auto-enrolment ought to be introduced in Ireland.

Having looked at the situation in the UK, Canada (which is similar to Ireland) and New Zealand (which is somewhere in between the UK and Ireland situations), CAI comes down in favour of an auto-enrolment system for all workers aged over 18 and earning more than €10,000 gross per annum.

It found that 87% of respondents in the survey said that employers, employees and the Government (through tax relief) should contribute to the scheme. It recommends the scheme should start with large employers in two years' time, rolling out swiftly to include all employers by 2021. Contributions would start at 1% for employer and employee, ramping up to 3% for employers and 5% for employees after an initial implementation period.

The 8% contribution rate is the key, as the tables produced by CAI show (see below) 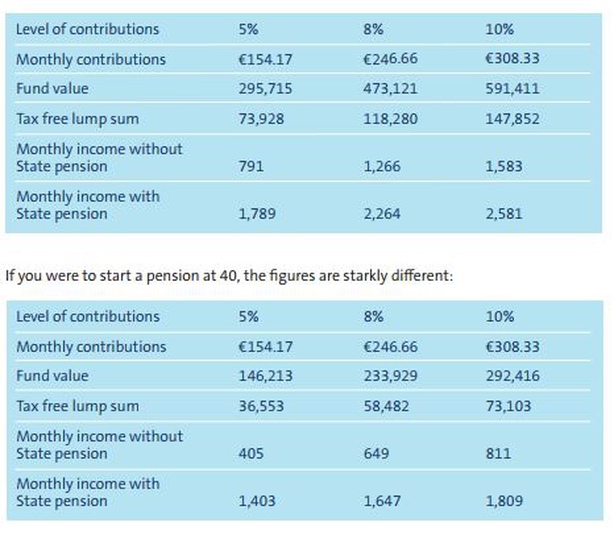 Of course the Government could make pension contributions compulsory – with no right to opt out. This is the way they do it in Australia, where 9.5% of gross salary must go into a pension fund.

The OECD also thinks Ireland should introduce a mandatory scheme, with automatic enrolment as a second best option. So why do the Chartered Accountants think second best is the one for us?

It is the ability to opt out for people facing affordability problems. A survey by the Department of Social Protection found affordability was the main reason (cited by 39%) for not joining a pension scheme.

There are people who earn so little or who are locked into long-term expenses (notably mortgage) that they have nothing to put aside for retirement saving. But having an automatic enrolment system will catch young people before they get into too much debt, and reducing over time the number of people who have no pension cover beyond the State pension. Ensuring that will be around for the long-term is another day's work.