The Government will consider buying large numbers of apartments prior to their construction in a bid to get tens of thousands more homes built.

Taoiseach Leo Varadkar said "advance purchasing" will be examined as Government wants to see the building of 70,000 apartments, which have already received planning permission in towns and cities.

Mr Varadkar was speaking after what he termed a "useful" meeting with building lobby groups and housing experts at Government Buildings.

He also said that tax measures to both encourage the building of more homes and to keep landlords in the rental market are not "off the table".

Mr Varadkar stated that the Government wants to exceed the target of building 28,000 homes this year and to increase the annual number of constructions to 40,000.

Along with Minister for Housing Darragh O'Brien, he held a conference this morning aimed at finding ways to speed up the delivery of the Government's housing strategy.

Taoiseach Leo Varadkar says rents in Ireland are 'very high' and out of line with competitive countries, and the average house in Ireland costs 7 to 8 times the average individual income | Read more: https://t.co/gGz8n1a9E5 pic.twitter.com/MR08NEtGhH

However, the opposition believes the meeting was merely an attempt by the new Taoiseach to show that he is addressing the crisis, which has resulted in more than 11,500 people being without a home.

Social Democrats housing spokesperson Cian O'Callaghan believes the conference will have no immediate impact on the lives of young adults still living in their childhood bedrooms due to spiralling property prices and exorbitant rents.

Sinn Féin Eoin Ó Broin claimed the meeting amounted to an admission that the Government's housing plan was failing. 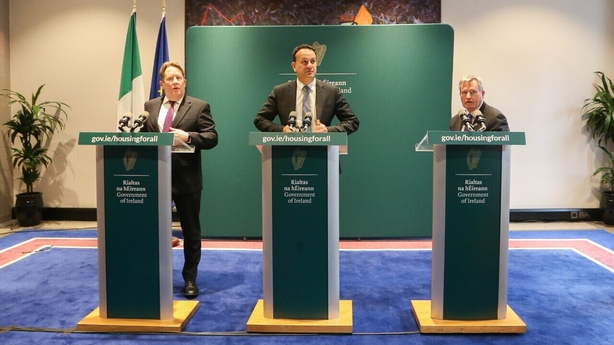 Mr O'Brien said the conference was an important opportunity to sit down with stakeholders and "hear their feedback and ideas about how we can expedite delivery" of housing.

Speaking on RTÉ's News at One, he said that he believes that the 2023 target of 29,000 homes can be met, but it will be challenging.

Mr O'Brien said end-of-year returns to be published in the coming weeks will be "positive and substantially higher than the previous year".

He said that there was "very strong delivery" in quarter four of last year.

Figures for the third quarter of last year show that there was a 66% decrease in the number of apartment units granted planning permission compared with the same period of the previous year.

He said that this was "concerning" but that it is "not a surprise" that there are issues with apartment viability.

The minister insisted that homelessness is his "absolute priority".

"The exits from homelessness is actually pretty good, but the problem is we're still seeing many people coming in and there's many reasons for that," he added.