Gardaí believe there is a link between the deaths of two men whose bodies were discovered at different locations in Co Monaghan early this morning.

A 60-year-old man was found first with apparent stab wounds at his home in Knockreagh, Lower Broomfield, a rural area near Castleblayney.

A short time later, a 37-year-old man whom gardaí suspect had left the house, died at Ballynacarry Bridge after he was hit by a car.

Gardaí have appealed for witnesses or anyone with information to contact them.

The house remains a crime scene and is sealed off for a forensic examination.

The body of the 60-year-old man was found at around 6.30 this morning, after what appeared to be a violent attack. 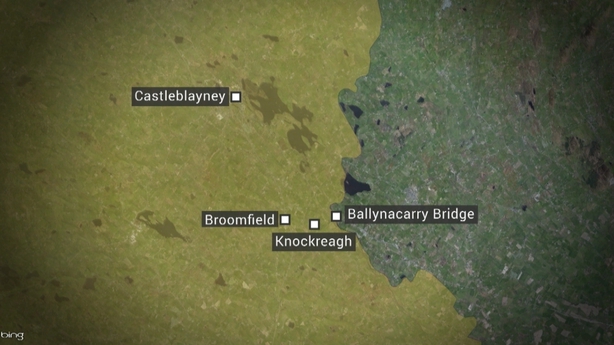 His body has since been removed from the scene to the mortuary in Our Lady of Lourdes Hospital Drogheda, where a post-mortem is due to take place tomorrow morning.

Gardaí say the results of that will determine the course of their investigation.

There was no sign of a burglary at the house.

A short time after the man's body had been found, gardaí were called to the scene of a road traffic collision a short distance away at Ballynacarry bridge near the border with Northern Ireland.

The 37-year-old man died after he was hit by a car on the N53 at around 7am. His body has also been brought to Our Lady of Lourdes Hospital in Drogheda for a post-mortem examination.

The road has since reopened following the incident.

Detectives suspect the man who was knocked down and killed may have been at the house at Broomfield earlier where the other man died violently.

They also believe they have identified the victims and are working to establish any connection between them, whether they knew each other and if there was some personal animosity between them or allegations surrounding either of them.

Motorists are advised that the Concession Road, Crossmaglen is closed due to a road traffic collision in the Ballynacarry Bridge area in County Monaghan this morning, Thursday December 1st.

Please avoid the area and seek an alternative route for your journey. pic.twitter.com/Yx3YfUxG8b