Irish Guide Dogs for the Blind is appealing for more volunteers to become puppy raisers to take in a puppy and help rear them to become guide dogs and assistance dogs.

Every year between 20 to 25 guide dogs retire from service.

Claire Whelan is vision impaired and has had guide dog Casi for the past nine years. But now the Labrador is retiring.

Speaking to RTÉ's News at One, she said: "When they told me she was retiring, I got a bit sad, but then I thought about it and she deserves to retire, not to be working because they do work hard, they work very hard."

Not only is she Claire's eyes but she has also been a constant companion.

"I went everywhere with her," said Claire.

"She was my independence. She really was. But it goes in so quick and then you bond with this little creature. She was doing a walk until a few weeks ago in the park with me up.

"She's been on a plane, I've had her in Glasgow. That was an experience."

As she waits to get a new dog, she is navigating the world again differently: "For the next while, I'll just have to use the cane and I know I just won't be as active. With the cane you've more concentration - you've more obstacles to think about."

We need your consent to load this rte-player contentWe use rte-player to manage extra content that can set cookies on your device and collect data about your activity. Please review their details and accept them to load the content.Manage PreferencesInstructor with Irish Guide Dogs for the Blind Cliodhna Ní Laoghaire said most dogs retire because they are coming to the end of their natural working life, which is around the age of ten.

She said it can be quite traumatic for the guide dog owner when their dog needs to retire.

Ms Ní Laoghaire said the process of getting a new dog is a matching process.

"Sometimes somebody will need to wait for a new guide dog because the match is really the paramount thing. We have to get the right dog for the right person," she said.

They are looking for more people to become puppy raisers to help to rear young pups.

When people were working from home a lot during the pandemic more people signed up to do it.

"But now a lot of those people have gone back to work or maybe aren't working from home, so that's why we are appealing right now for puppy raisers," said Ms Ní Laoghaire.

Laura Curtin is in the process of raising her ninth pup to prepare him to become a guide dog.

She has just taken in Diego, who is just eight weeks old.

"We love doing it because it brings lots of love and fun into the house."

Big plans ahead for this little guy: This is Diego the puppy who is being raised by volunteers with the prospect of becoming a guide dog one day. https://t.co/fn7kJCfTgt pic.twitter.com/olt4J7l7AB

She said : "It's hard work. They're like having toddlers in your house but you know they're going on to do good things and when I've heard the stories of how they've changed people's lives it makes it all worthwhile."

As Claire Whelan prepares to get her new dog, she is saying goodbye to her old one and said she cannot keep two dogs.

"She is going up to Ardee to my friend and she will have a wonderful life. So I don't have to worry, I am sad about it but she has to have a life after work as well.

"It is a bit like a death. But I know she will be happy," she said. 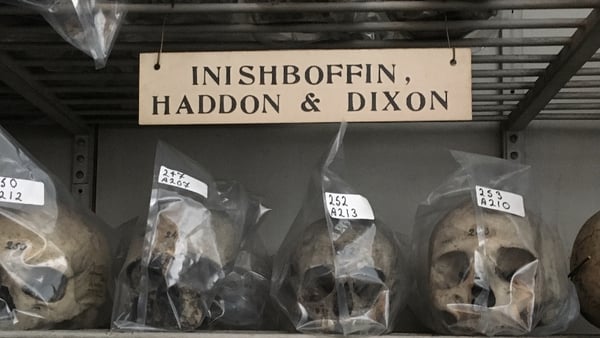