Ten people, including a young child and two teenagers, are confirmed to have died following yesterday's explosion in Creeslough, Co Donegal.

Four men and three women died in blast, along with a teenage boy and girl and a girl of primary school age.

Eight people were taken to hospital for treatment after the explosion. One person has since been transferred to a burns unit in Dublin.

Gardaí said emergency services do not expect any more casualties at the scene and that no one else is unaccounted for.

During a service to remember the victims tonight, Local priest Fr John Joe Duffy hailed a major rescue effort over the last two days as "unparalleled in measure" during the service at St Michael's Church.

He added that the days ahead will be difficult days.

"I wish there was some easier way, but unfortunately there is not," he said.

"However, the strength of our community will carry us."

He said the parish "owed so much" to those who had taken part in the emergency search operation.

Taoiseach Micheál Martin said the great loss of life in Creeslough will have an "enormous" impact on the community.

Speaking on RTÉ's Six One as he visited the scene in Co Donegal, Mr Martin also praised the emergency workers who had worked tirelessly for the last 24 hours.

"When one comes to the scene and the Applegreen site, one is greeted with a terrible sadness, reflecting an enormous loss on a scale that no-one can comprehend," the Taoiseach said.

"The loss of life is great, the impact on this community is enormous and we have to do everything we possibly can to be with the community and to support the community," he said.

The ten people who died in the explosion were all pronounced dead at the scene and their bodies were later removed to Letterkenny University Hospital, where post-mortem examinations will be carried out.

Superintendent Dave Kelly of Milford Garda Station said a garda investigation is under way but the information at this stage is pointing towards a tragic accident.

The blast - which happened at around 3.20pm yesterday - destroyed a service station building and a section of an apartment block on the outskirts of the village.

Gardaí confirm that among the 10 dead in yesterday's tragedy in Creeslough are four men, three women, a teenage boy, a teenage girl, and another younger girl | More: https://t.co/tMXfWXGSiY pic.twitter.com/haKKZgpaf7

Supt Kelly said: "This is a tragedy for our community. There are families left devastated.

"I want to offer, on behalf of myself and my colleagues that attended the scene, our very sincere condolences.

"I would like say as well, and forgive me if I get a bit emotional because you are dealing with the public. 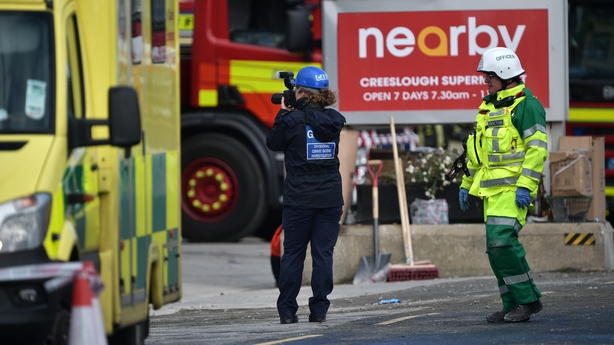 "That said being a garda, I have to take a holistic and overall viewpoint, but that's where we are going at the moment.

"We are following certain investigative angles but for operational reasons, I am not going in to that."

It was also confirmed that all victims were from the Creeslough area.

Garry Martin, director of emergency services at Donegal County Council, said workers will remain on site in Creeslough for the ongoing search and checking phase to ensure there are no remaining casualties in the building.

"Each and every one of you have gone above and beyond in your response," he said, extending particular thanks to the Northern Ireland Ambulance Service and Air Ambulance for their support.

"We will continue our efforts and work with our colleagues in the gardai and the fire service until all recovery efforts have concluded."

Sixty-five fire service personnel from six brigade areas across Co Donegal were mobilised in response to the explosion.

Multiple emergency service vehicles remained at the scene overnight, including fire services from both sides of the border, gardaí and civil defence, while a coastguard helicopter airlifted some of those who were injured in the blast from Letterkenny University Hospital to Dublin.

Sniffer dogs were also being used amid the rubble.

Hospital manager Sean Murphy said that yesterday was an "unbelievably tragic and sad day" for the community and county.

Speaking on RTÉ's Morning Ireland, Mr Murphy expressed his sympathies to all those who have lost loved ones and those who are waiting for news. He said there were eight people brought to the hospital, one of whom was transferred to a specialist unit in Dublin, while a number of people were also treated at the scene yesterday.

He paid tribute to the work of staff at the hospital, as well as community and care services in the area.

He said they did admit a number of children, but did not want to go into detail.

President Micheal D Higgins has said his thoughts and prayers are with those who have lost their lives, and their families.

In a statement this morning, President Higgins said: "May I, as President, express what I know will be the shock shared by all people throughout the country on learning of the terrible tragedy which has unfolded in Creeslough, Co Donegal.

"All of our thoughts must go out to all of those who have been affected. Those who have got news of loss of a loved one, those injured and, most of all, those who are waiting with anxiety for news of their loved ones."

Gardaí have asked that any motorists intending to travel to the Creeslough area for any reason consider alternative routes as emergency services continue to deal with the incident.

Among those gathered at the scene cordon last night were relatives of people believed to have been in the buildings at the time.

A local hotel stopped taking bookings from members of the public to ensure all spare rooms were held for first responders. 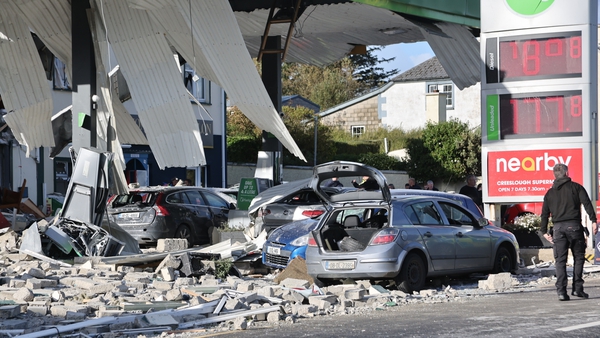 'Every loss will be felt across community' - President Michael D Higgins