Ukraine appears on course to achieve several of its key battlefield objectives as Kyiv moves to strengthen its military position against Russia ahead of the winter, a senior Pentagon official has said.

The upbeat assessment by Celeste Wallander, US Secretary of Defense for International Security Affairs, came on the same day that Ukrainian forces achieved their biggest breakthrough in the country's south since the war began.

"Ukraine seems to be on track to achieve in all three of those objectives right now," Ms Wallander told the Center for Strategic and International Studies, a Washington think tank.

"Ukraine's goal is to push back the Russian bridgehead on the western Bank of the Dnipro in Kherson," Wallander explained.

That, she said, would represent "a major defeat for Russia."

Earlier, the detained chief of Ukraine's Russian-occupied nuclear power plant was released, the head of the UN nuclear watchdog has said.

"I welcome the release of Ihor Murashov, director general of Ukraine's Zaporizhzhia Nuclear Power Plant; I have received confirmation that Mr Murashov has returned to his family safely," Rafael Grossi, the head of the International Atomic Energy Agency (IAEA) said on Twitter.

Last Saturday, Ukraine had called for the immediate release of Mr Murashov, condemning his "illegal detention".

Zaporizhzhia - Europe's largest nuclear energy facility - has been at the centre of recent tensions after Russia and Ukraine accused each other of strikes on and near the plant, raising fears of an atomic disaster.

Mr Murashov was detained by a "Russian patrol" last Friday at around 4pm local time (2pm Irish time) on his way from the plant to the city of Enerhodar, the head of Ukraine's nuclear agency Enerhoatom, Petro Kotin, said in a statement.

He said Mr Murashov's vehicle was stopped, he was taken out of the car and "with his eyes blindfolded, he was driven in an unknown direction".

Ukraine's foreign ministry said in a statement it "condemns in the strongest terms the illegal detention".

Mr Murashov "bears the main and exclusive responsibility for the nuclear and radiation safety" of the Zaporizhzhia plant, according to Mr Kotin.

The nuclear plant is located in Russian-held territory of Ukraine's Zaporizhzhia region, which Russia recently annexed together with three other territories in Ukraine: Donetsk, Luhansk and Kherson.

Shelling around the plant has spurred calls from Ukraine and its Western allies to demilitarise areas around nuclear facilities in Ukraine.

A monitoring team from the UN visited Zaporizhzhia in early September, and the IAEA has been pushing Ukraine and Russia to agree to set up a security zone around the plant to seek to avoid any nuclear accidents.

Mr Grossi said over the weekend that he was expecting to travel to Kyiv and Moscow this week to discuss this.

Ukraine gave no official confirmation of the gains it made in the south of the country, but Russian sources acknowledged that a Ukrainian tank offensive had advanced dozens of kilometres along the river's west bank, recapturing a number of villages along the way.

The breakthrough mirrors recent Ukrainian successes in the east that have turned the tide in the war against Russia, even as Moscow has tried to raise the stakes by annexing territory, ordering mobilisation and threatening nuclear retaliation.

"The information is tense, let's put it that way, because, yes there were indeed breakthroughs," Vladimir Saldo, the Russian-installed leader in occupied parts of Ukraine's Kherson province told Russian state television.

"There's a settlement called Dudchany, right along the Dnipro River, and right there, in that region, there was a breakthrough. There are settlements that are occupied by Ukrainian forces," he said.

Dudchany is around 30km south of where the front stood before the breakthrough, indicating the fastest advance of the war so far in the south, where Russian forces had been dug into heavily reinforced positions along a mainly static frontline since the early weeks of the invasion.

While Kyiv maintained almost complete silence, as it has in the past during major offensives, some officials did describe what they referred to as unconfirmed reports of big gains.

Anton Gerashchenko, an adviser to Ukraine's interior ministry, posted a photo of Ukrainian soldiers posing with their flag draping a golden statue of an angel. He said it was the village of Mikhailivka, around 20km beyond the previous front.

By this afternoon, Ukraine's defence ministry had confirmed only the recapture of Myrolyubivka, a village close to the previous front line.

"It means that our armed forces are moving powerfully along the banks of the Dnipro nearer to Beryslav," he said.

"Officially, there is no such information yet, but the (Russian) social media pages which are panicking... absolutely confirm these photos."

The advance in the south mirrors the tactics that have brought Kyiv major gains since the start of September in eastern Ukraine, where its forces swiftly seized territory to gain control of Russian supply lines, cutting off larger Russian forces and forcing them to retreat. 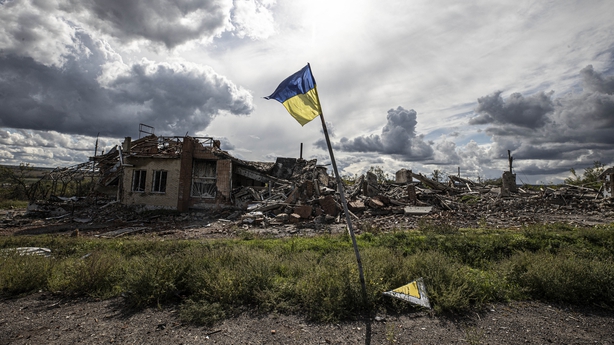 Just hours after a concert on Moscow's Red Square on Friday where Russian President Vladimir Putin proclaimed the provinces of Donetsk, Luhansk, Kherson and Zaporizhzhia to be Russian territory forever, Ukraine recaptured Lyman, the main Russian bastion in the north of Donetsk province.

That has opened the way for it to advance deep into Luhansk province, threatening the main supply routes to territory Moscow captured in some of the war's bloodiest battles in June and July.

In the south, Ukraine's advance targets supply lines for thousands of Russian troops - perhaps as many as 25,000 - on the west bank of the Dnipro. Ukraine has already destroyed the main bridges, forcing Russian forces to use makeshift crossings. A substantial advance down river could cut them off entirely.

"The fact we have broken through the front means that ...the Russian army has already lost the ability to attack, and today or tomorrow it could lose the ability to defend," said Oleh Zhdanov, a military analyst based in Kyiv.

"A month of our work destroying their supplies and reducing the combat effectiveness of this group means that they are functioning on minimal rations in terms of ammunition, fuel and food."

Mr Putin has been responding to Russia's failures on the battlefield over the past month by escalating: proclaiming the annexation of occupied territory, calling up tens of thousands of men as reservists and threatening nuclear retaliation.

Russia's State Duma, the lower house of parliament which is firmly under the control of Mr Putin's ruling party, passed bills this morning endorsing the annexation of the four partly occupied Ukrainian provinces.

But Russia's flagging fortunes have led to a shift in mood on once triumphal state media, where talk show hosts have been acknowledging setbacks and searching for scapegoats.

"For a certain period of time, things won't be easy for us. We shouldn't be expecting good news right now," said Vladimir Solovyov, the most prominent presenter on state TV.

Ramzan Kadyrov, the pro-Putin leader of Russia's Chechnya province who commands a personal army, demanded the commander of Russian forces in eastern Ukraine be stripped of his medals and sent to the front line.

He also said Russia should use a nuclear weapon. Mr Putin and other officials have said they could use nuclear weapons to protect Russian territory including newly annexed provinces, but had so far stopped short of explicitly saying they will do so. Asked about Mr Kadyrov's remarks, Kremlin spokesman Dmitry Peskov said: "This is a very emotional moment."

"The heads of regions have the right to express their point of view," Mr Peskov told reporters. "Even at difficult moments, emotions should still be excluded from any assessments."

Mr Putin's other big gamble, Russia's first mass military mobilisation since World War II, has been mired in chaos. Tens of thousands of Russian men have been called up, while similar numbers have fled abroad.

Western countries say Moscow lacks the supplies and manpower to train or equip the new conscripts.

Mikhail Degtyarev, governor of the Khabarovsk region in Russia's Far East, said that around half of those called up there had been found unfit and sent home. He fired the region's military commissar.