The worst drought in the Horn of Africa in more than 40 years looks almost certain to persist after the World Meteorological Organization said that forecasts for October-December show high chances of drier-than-average conditions.

The latest outlook confirms the fears of aid agencies which have been warning for months about the worsening consequences of the drought for Ethiopia, Somalia and parts of Kenya, including a risk of famine for Somalia.

"Sadly, our models show with a high degree of confidence that we are entering the 5th consecutive failed rainy season in the Horn of Africa," said Guleid Artan, Director of the IGAD Climate Prediction and Applications Centre (ICPAC), WMO's regional climate centre for East Africa.

"In Ethiopia, Kenya, and Somalia, we are on the brink of an unprecedented humanitarian catastrophe," he added.

The drought has coincided with a global rise in food and fuel prices, pushed up by the war in Ukraine, that has hit parts of Africa hardest.

The World Bank said in June that an estimated 66.4 million people in the Horn of Africa region were forecast to experience food stress or a food crisis, emergency, or famine by July.

New estimates based on the latest forecasts were not immediately available.

"The WHO is very concerned about this situation. It does lead to many families taking desperate measures to survive," said Carla Drysdale, a spokesperson for the World Health Organization told a Geneva press briefing. 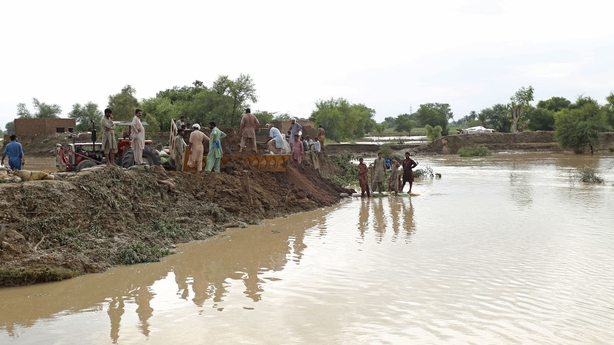 Elsewhere, heavy rain has pounded parts of Pakistan after the government declared an emergency to deal with monsoon flooding that it said had affected more than four million people.

The annual monsoon is essential for irrigating crops and replenishing lakes and dams across the Indian subcontinent, but each year it also brings a wave of destruction.

The National Disaster Management Agency has said that more than 900 people had been killed this year - including 34 in the last 24 hours - as a result of the monsoon rains that began in June.

Officials say this year's floods are comparable to 2010 - the worst on record - when over 2,000 people died and nearly a fifth of the country was under water.

The disaster agency said over 4.2 million people were "affected" by the flooding, with nearly 220,000 homes destroyed and half a million more badly damaged.

Two million acres of cultivated crops had been wiped out in Sindh alone, the provincial disaster agency said, where many farmers live hand-to-mouth, season-to-season.

Climate Change Minister Sherry Rehman, who on Wednesday called the floods "a catastrophe of epic scale", said the government had declared an emergency, and appealed for international assistance.

Pakistan is eighth on the Global Climate Risk Index, a list compiled by the environmental NGO Germanwatch of countries deemed most vulnerable to extreme weather caused by climate change.

Earlier this year much of the nation was in the grip of a drought and heatwave, with temperatures hitting 51C in Jacobabad, Sindh province.