The Pentagon has announced $1 billion in fresh military aid for Ukraine, including additional Himars system missiles that have helped Kyiv's forces attack Russian troops far behind the front lines.

The announcement also includes 50 armoured medical transport vehicles. The package adds to about $8.8 billion in aid the United States has given Ukraine since Russia's invasion on 24 February.

It comes as the Kremlin accused Ukrainian forces of firing on Europe's largest nuclear power plant in occupied Ukraine and warned the alleged attacks could have "catastrophic consequences".

Separately, Ukraine warned of the risk of a Chernobyl-style catastrophe at the Zaporizhzhia nuclear complex and appealed for the area to be made a demilitarised zone.

Meanwhile, the United Nations chief called for access to the plant as Ukraine and Russia traded blame for shelling in a southern region captured by Russian forces in March and now targeted by Kyiv for a counter-offensive.

"Any attack (on) a nuclear plant is a suicidal thing," UN Secretary General Antonio Guterres told a news conference in Japan, where he attended the Hiroshima Peace Memorial Ceremony on Saturday to commemorate the 77th anniversary of the world's first atomic bombing.

Head of Ukraine's state nuclear power company Energoatom Petro Kotin called for a team of peacekeepers to be deployed at the Zaporizhzhia site, which is still run by Ukrainian technicians.

"The presence of peacekeepers in this zone and the transfer of control of it to them, and then also control of the station to the Ukrainian side would resolve this problem."

Despite the shelling, the Zaporizhzhia complex was operating in "normal mode", Russia's Interfax news agency quoted the Russian-installed local administration head as saying.

Ukraine blamed Russia for renewed shelling in the area of the plant on Saturday that it said damaged three radiation sensors, with two workers hospitalised for shrapnel injuries.

It was the second reported hit on the plant in as many days, after damage to power lines servicing the plant.

In a call with reporters, Kremlin spokesman Dmitry Peskov said the shelling was "extremely dangerous" and added: "We expect the countries that have absolute influence on the Ukrainian leadership to use this influence in order to rule out the continuation of such shelling."

Mr Kotin flagged the danger of shells hitting spent containers of highly radioactive spent nuclear fuel as especially dire. If two or more containers were broken, "it is impossible to assess the scale of this catastrophe".

The world's worst civil nuclear disaster occurred in 1986 when one of the four reactors of the Chernobyl plant in northwest Ukraine caught fire and exploded.

Ukraine has said it is planning to conduct a major counter-offensive in the Russian-occupied south, apparently focused on the city of Kherson, west of Zaporizhzhia, and that it has already retaken dozens of villages.

The CCI is urging that any attack or takeover on a nuclear facility be declared a war crime with "maximum penalties".

Elsewhere, a deal to unblock Ukraine's food exports and ease global shortages gathered pace as two grain ships sailed out of Ukrainian Black Sea ports this morning, raising the total to 12 since the first vessel left a week ago.

The 22 July grain export pact brokered by Turkey and the United Nations represents a rare diplomatic triumph as fighting churns on in Ukraine and aims to help ease soaring global food prices arising from the war.

Before the invasion, Russia and Ukraine together accounted for nearly a third of global wheat exports. The disruption since then has raised the spectre of famine in parts of the world.

Ukraine hopes to export 20 million tonnes of grain in silos and 40 million from its new harvest to help rebuild its wrecked economy, senior economic adviser Oleh Ustenko said in July.

Russia says it is waging a "special military operation" in Ukraine to rid it of nationalists and protect Russian-speaking communities.

Ukraine and the West describe Russia's actions as an unprovoked imperial-style war to reassert control over a pro-Western neighbour lost when the Soviet Union broke up in 1991.

The conflict has displaced millions, killed thousands of civilians and left cities, towns and villages in ruins.
Russian forces are trying to gain full control of Ukraine's eastern Donbas region where pro-Moscow separatists seized territory after the Kremlin annexed Crimea to the south in 2014.

"Ukrainian soldiers are firmly holding the defence, inflicting losses on the enemy and are ready for any changes in the operational situation," Ukraine's general staff said in an operational update today.

Russian forces stepped up attacks north and northwest of Russian-held Donetsk city in the Donbas on Sunday, Ukraine's military said. It said the Russians pounded Ukrainian positions near the heavily fortified settlements of Piski and Avdiivka, as well as shelling other locations in Donetsk province.

Russia is also trying to entrench its position in southern Ukraine, where it has been building up forces in a bid to fend off any counter-offensive near Kherson, Kyiv has said. 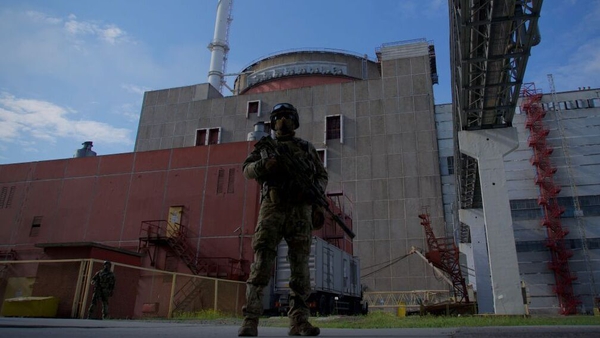