The five remaining Conservative candidates to become Britain's next prime minister have clashed in their first TV debate over tax and honesty in politics, as they fight to make an eventual two-person run-off.

In a mainly muted 90-minute debate - the first chance in the days-old contest for both the frontrunners and lesser-known contenders to pitch their credentials to a national television audience - there were relatively few direct confrontations between them.

But when they did erupt, it came largely over taxation, with former finance minister Rishi Sunak, one of the frontrunners, forced to defend plans to keep rates at some of the highest levels in decades.

Mr Sunak, who has topped the first two rounds of voting by Tory MPs this week as the race narrows towards choosing a final pair next week, is up against several contenders vowing to cut various taxes immediately.

The polished media performer, whose political fortunes have been damaged by his family's tax affairs and questions over his long-term commitment to Britain, urged both caution and patience as the UK grapples with the worst inflation in 40 years.

"Borrowing your way out of inflation isn't a plan, it's a fairytale," Mr Sunak said, as rivals touted their tax-slashing plans in the face of a spiralling cost-of-living crisis.

Foreign Secretary Liz Truss - fighting to unite the ruling party's right wing behind her so-far lagging campaign after twice finishing third in votes - has positioned herself as a low-tax free marketeer.

She has backing from prominent Johnson loyalists, despite wanting to reverse his government's recent tax rise earmarked for healthcare.

"You cannot tax your way to growth," Ms Truss said.

"I think it is wrong to put taxes up."

The five Conservative MPs bidding to succeed him initially faced hostile questions, from an invited audience of voters and a single political broadcaster, over trust and integrity.

That allowed long-shot candidates Tom Tugendhat, a prominent backbencher, and former equalities minister Kemi Badenoch, to pitch themselves as untainted and ready to provide a fresh start.

"Are you serving the people of the United Kingdom or are you serving your career? Because that's the real question tonight," Mr Tugendhat said, as he repeatedly drew applause from attendees.

In a sign of the shadow cast by Mr Johnson, the contenders were asked if he was honest and none felt able to give a wholehearted endorsement. 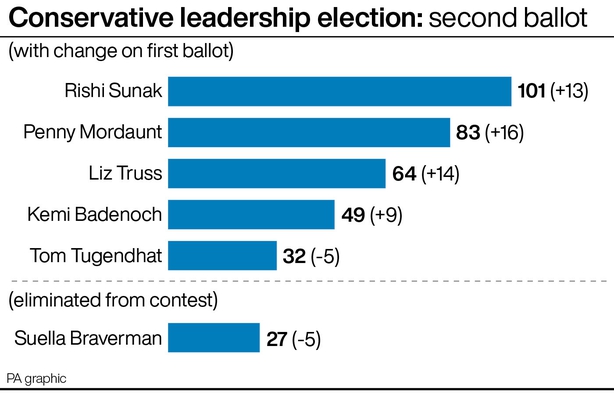 Whoever gets the job will take on rocketing inflation and low economic growth, as well as the public's lack o

"There have been some really severe issues and I think he has paid a price for that," she said.

The Royal Navy reservist, who was briefly Britain's first woman defence secretary, but was demoted to junior minister roles under Mr Johnson, has been subject to increasing attacks from rival camps.

The claims include she is too inexperienced, has a shifting stance on transgender rights and was allegedly incompetent in government jobs.

"I take it as a big fat compliment that no one wants to run against me," Ms Mordaunt said of the attacks.

The ballots of Conservative MPs will end on Wednesday with the selection of the two finalists, which the party's rank-and-file members will then vote on following nationwide campaigning and hustings.

A winner will be announced on 5 September.

While Mr Johnson has said he will stay above the fray, his supporters have spoken acidly against Mr Sunak, as the contest gets increasingly divisive.

The worsening acrimony prompted Mr Tugendhat to call it "a knife fight in a phone box" ahead of the debate and urging the party to unite.

But some former cabinet members have also turned their fire on Ms Mordaunt.

Attorney General Suella Braverman, who was eliminated on Thursday, accused Ms Mordaunt of failing to "stand up for women" as she threw her support behind Ms Truss.

Meanwhile ex-Brexit minister David Frost wrote in the Daily Telegraph that Ms Mordaunt had been "absent on parade" when they worked together on negotiations with Brussels.

Earlier today, the candidates took part in an online hustings, detailing policy priorities alongside warm words for the Tory base.

They will participate in another televised debate Sunday, before Tory MPs next vote Monday, when the field will likely be cut to four.

A further vote and TV debate is scheduled for Tuesday, before the final pair of contenders to be voted on by members is decided by Conservative MPs on Wednesday.