The US Supreme Court's historic end to nationwide abortion rights yesterday drew unusual criticism from some of America's closest allies and bucks a global trend to more liberal reproductive rights.

The decision came one day after the Supreme Court also struck down some of the modest restrictions on guns - an issue that, along with the US embrace of the death penalty, has long shocked other Western nations.

"I think it's a big step backwards. I've always believed in a woman's right to choose and I stick to that view, and that's why the UK has the laws that it does," Mr Johnson said on a visit to Rwanda.

Canadian Prime Minister Justin Trudeau denounced the decision across the border as "horrific".

"No government, politician, or man should tell a woman what she can and cannot do with her body," Mr Trudeau wrote on Twitter.

French President Emmanuel Macron voiced his "solidarity with women whose freedoms are today challenged" by the US Supreme Court, while Swedish Foreign Minister Ann Linde said that legal and safe abortion was a fundamental right.

"Depriving women of their individual rights is a backlash against decades of hard-fought work," Ms Linde said.

Among the few world leaders who may be heartened by the ruling is Brazilian President Jair Bolsonaro, an ally of former president Donald Trump and his own country's evangelical Christians, who took to Twitter hours before the decision to denounce an abortion carried out on an 11-year-old girl who was pregnant as the result of rape. 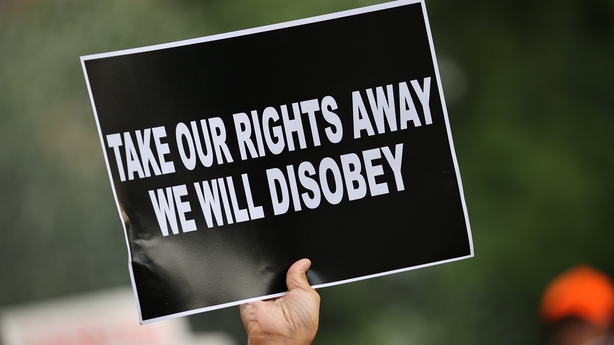 US President Joe Biden himself deplored that the top court has "made the United States an outlier among developed nations in the world" as he vowed to keep up efforts to secure legal abortion.

Mr Biden made his remarks on the eve of flying to a summit in Germany, which just yesterday repealed a Nazi-era law that limits the information that doctors and clinics can provide about abortion.

And US Secretary of State Antony Blinken made a point of stressing in a statement last night that his agency remains "fully committed" to helping provide access to reproductive health services both around the world and among its employees.

The United States was one of the first countries to grant a nationwide right to abortion with the 1973 Roe v Wade decision that was overturned yesterday after years of mobilisation by opponents.

But the United States was also an outlier in its sweeping right to abortion until foetal viability, although advocates stress that few doctors perform late-term abortions except in exceptional circumstances.

Representative Mike Waltz, a Republican, said that the United States had been "one of only a handful of countries in the world that allow abortion on demand, comparable to authoritarian regimes such as China and North Korea."

"Even most European nations maintain some restrictions for abortions," he said in a statement.

The Supreme Court decision, he said, "will save millions of innocent, unborn lives".

But drawing the anger of Republican administrations, a number of aid groups have advocated for legal abortion on the grounds that banning it would only make the procedure less safe and put women's lives at risk.

David Miliband, president of the International Rescue Committee and a former British foreign secretary, said the Supreme Court decision "marks a dark day for reproductive rights and bodily autonomy not just within the United States but the world over".