Two men in their 70s have died following a three-car collision in Co Sligo this afternoon.

It brings to five the number of people who have died on the roads this weekend.

The collision in Sligo occurred on the N15 in Rathcormack at around 5.20pm.

Three cars were involved in the collision. The two men, the driver and passenger of one vehicle, were fatally injured during the collision.

The N15 is closed between Sligo town and Drumcliffe while Garda Forensic Collision Investigators conduct a technical examination of the scene.

The road will remain closed overnight and local diversions are in place.

Gardaí in Sligo are appealing to any road users who may have camera footage (including dash cam) of the Rathcormack area between 5pm-5.30pm to make it available.

The two deaths come as the Road Safety Authority renewed its appeal to all road users and in particular motorcyclists to take care on the roads this bank holiday weekend.

Three motorcyclists have been killed on the roads since Friday.

Two men in their 50s and 60s were killed on Dublin's M50 on Friday. The collision involved two motorcycles and a truck. 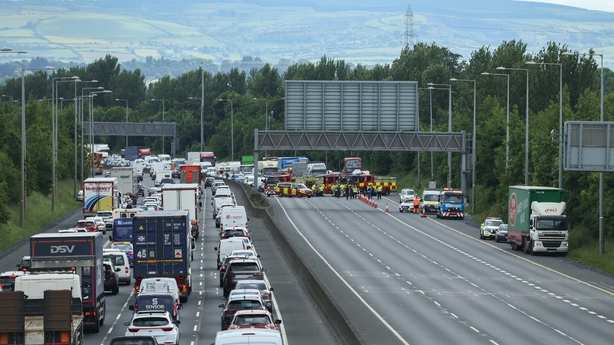 In Kilkenny, a motorcyclist in his 40s was killed and two other motorcyclists were seriously injured following a crash near Clifden yesterday afternoon.

The two deaths in Sligo today bring to 76 the number of people who have died on Irish roads so far this year.

That figure is up significantly on the same time last year, when 48 people had been killed.

Of the 76 people killed so far in 2022, figures show that 17 have been motorcyclists.

There were 22 motorcyclist deaths in 2021, according to the Road Safety Authority.