EU leaders have agreed to ban the export of Russian oil to the 27-nation bloc, EU Council President Charles Michel has said, as Ukrainian and Russian forces battled on the outskirts of Sievierodonetsk, the last city still held by Kyiv in Ukraine's strategic Luhansk province.

Mr Michel said on Twitter that the ban would immediately cover more than two thirds of oil imports from Russia "cutting a huge source of financing for its war machine."

Agreement to ban export of Russian oil to the EU.

This immediately covers more than 2/3 of oil imports from Russia, cutting a huge source of financing for its war machine.

Maximum pressure on Russia to end the war.

Shortly before the announcement, Ukrainian President Volodymyr Zelensky had said the situation remained "extremely difficult" in the Donbas region, where Russia has focus of its military effort after failing to capture Ukraine's capital, Kyiv, in March.

Mr Zelensky had called the EU too soft on Moscow when it appeared leaders would not reach an agreement on the oil ban.

Russia has been seeking to seize the entire Donbas region, consisting of Luhansk and Donetsk, another province Moscowclaims on behalf of separatist proxies.

Capturing Sievierodonetsk and its twin city Lysychansk on the opposite bank of the Siverskyi Donets river would give Moscow effective control of Luhansk and allow the Kremlin to declare some form of victory after more than three months ofdeath and destruction in Ukraine.

But by focusing on a battle for the single small city, Russia could leave other territory open to Ukrainian counterstrikes.

In his nightly address, Mr Zelensky said the Donbas situation "remains extremely difficult" and said the Russian army was "trying to gather a superior force to put more and more pressure on our defenders."

"The Russian army has now gathered there the maximum combat power," he said of Donbas as a whole.

Kyiv said that in recent days, its forces pushed back Russian troops to defensive positions in Andriyivka, Lozove and Bilohorka, villages on the south bank of the Inhulets River that forms the border of Kherson province, where Moscow is trying to consolidate control. 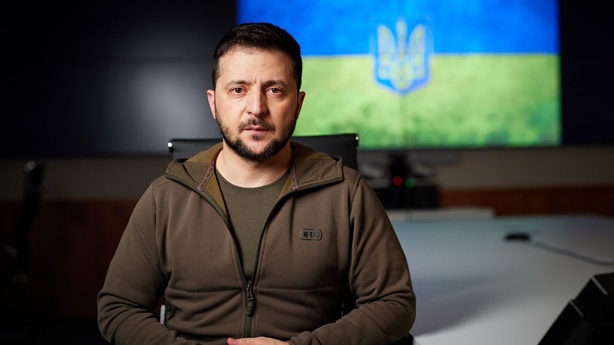 Taoiseach Micheál Martin had earlier said he understood the frustrations of the Ukrainian people "given what they are facing, given the terror that's been waged upon them, the levelling of towns and the levelling of villages".

He added: "I do think it is important that some countries are more dependent on Russian oil and gas than others, and the need to get consensus is an important one to maintain unity.

He said significant progress had been made by diplomats ahead of the meeting and that there was an onus "on all countries…to ratify what has been concluded in the text".

The Taoiseach told reporters: "I would appeal to Hungary and to Prime Minister Orban to support this package and to agree with this package and I'll be using the meeting this evening to articulate our view and our position on that.

"We're strongly supportive. It's important to have unity, but what's important as well from the perspective of the people of Ukraine, [is] that action results from this meeting."

A sixth wave of EU measures against Moscow was put on the table four weeks ago, but EU unity shown in implementing five earlier waves of unprecedented sanctions on Moscow appeared to have hit its limit.

The latest proposed compromise would exclude the Druzhba pipeline from the oil embargo and only impose sanctions on crude shipped to the EU by tanker vessel, which counts for two-thirds of Russian oil imports.

An EU official said the leaders would attempt to find a "political agreement" on the Russian oil ban, with exceptions for specific countries worked out "as soon as possible".

EU sanctions require the backing of all member states and ambassadors fell short of finalising a deal just hours before the start of the summit.

Landlocked Hungary imports 65% of its oil from Russia through the Druzhba pipeline and, along with Slovakia and the Czech Republic, has asked for an exception from the import ban.

Diplomats said a two-year delay to the embargo had been granted to the countries concerned, but that Budapest wanted at least four years and nearly €800m in EU funding to adapt its refineries.

"There is quite a lot of sympathy for Hungary's oil supply issues, which are great, despite the antics by Orban," an EU diplomat said on condition of anonymity.

Hungary's intransigence comes on the back of Mr Orban's recent resounding re-election to a fourth term and some experts are sceptical about the official claims of alarm over a Russian oil ban.

Further complicating the stand-off is Hungary's share of the EU's €800bn recovery fund, which Brussels has yet to approve due to disagreements over Budapest's respect for the rule of law.