About 500 protesters, some shouting "NRA go away," and "Shame, it could be your kids today," jeered as thousands of members of the nation's biggest gun lobby thronged the conventional centre.

Tuesday's fatal shooting of 19 children and two teachers at the school in Uvalde by an 18-year-old gunman equipped with an AR-15 style semiautomatic assault rife is expected to limit attendance at the group's first convention in three years.

Uvalde is about 450km west of Houston. Mr Abbott plans to deliver a pre-recorded address and will travel to Uvalde later. Mr Patrick said he withdrew to not "bring any additional pain or grief to the families and all the suffering in Uvalde."

The convention also comes in the wake of a mass shooting in Buffalo, New York, in which an 18-year-old boy shot dead ten people at a supermarket. 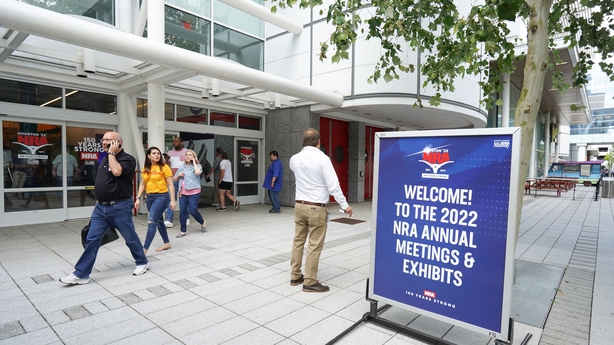 But with millions of Americans grieving and angry following the worst school shooting in a decade, "American Pie" singer Don McLean led a wave of country music dropouts from the three-day event.

Mr McLean said it would be "disrespectful and hurtful" to perform at the "Grand Ole Night of Freedom" concert scheduled during the convention tomorrow.

At least five other country music stars, including Lee Greenwood and Larry Gatlin, have also reportedly pulled out.

On the convention centre's exhibit floor, attendees could handle rifles, handguns, hunting and assault rifles at dozens of booths, and browse Sierra Bullets and other firms' ammunition displays.

Some strolled the floor wearing cowboy hats and red Trump2024 hats. One man waiting to get his badge called himself a lifetime NRA member, and jokingly asked if there were "afterlife" memberships available so he could always stay a member.

Tim Hickey, a Marine Corps veteran attending the event, dismissed the protests. "These people are puppets and sheep to the media. They are not changing anyone's mind," he said. Outside, protestor Melinda Hamilton, 60, the founder of Fort Worth, Texas-based Mothers of Murdered Angels and who lost her daughter and grandson to gun violence, held a vigil on a park across the street from the convention.

"They have to change the laws and we have to fight to change these laws. It doesn't make any sense that an 18-year-old can buy a gun," she said, referring to the ages of the Uvalde and Buffalo supermarket shooters.

Houston activist Johnny Mata called on the NRA to halt the convention and hold a memorial service for the victims.

"They have the audacity not to cancel in respect of these families", said Mr Mata, who represented advocacy group Greater Houston Coalition for Justice.

The NRA should "quit being a part of the assassination of children in American schools," he said. 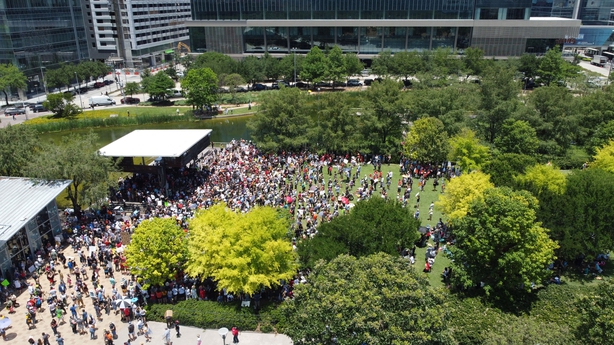 The NRA's decision to proceed with its largest annual gathering is part of a decades-long strategy of standing up to pressure for gun control that dates to the 1999 Columbine High School shooting in Colorado.

The weekend convention is the five million-member group's first annual get together after two prior cancellations due to the Covid-19 pandemic.

Posters celebrating its 150th anniversary hung over the exhibit hall.

Outside the National Rifle Association agm in Houston Texas pic.twitter.com/AZaL9RAQM0

Despite the scourge of mass shootings, efforts at nationwide gun control - from banning assault rifles to mandating mental health and criminal background checks on buyers - have repeatedly failed, although polls show support from a majority of Americans.

President Joe Biden will visit Uvalde on Sunday to once again make the case for gun control, as activists set about galvanizing voters on the issue in the run-up to November's midterm election.

And the March for Our Lives advocacy group - founded by survivors of the 2018 Parkland school shooting in Florida - has called for nationwide protests on 11 June to press the cause.