Australia's Labor Party leader Anthony Albanese has been sworn in as the country's 31st prime minister, promising a "journey of change" as he vowed to tackle climate change, rising living costs and inequality.

Labor returns to power after nine years in opposition as a wave of unprecedented support for the Greens and climate-focused independents, mostly women, helped end nearly a decade of rule by the conservative coalition in Saturday's general election.

While votes are still being counted and the makeup of government has yet to be finalised, Mr Albanese was sworn in so he could attend a key meeting of the "Quad" security grouping in Tokyo tomorrow. 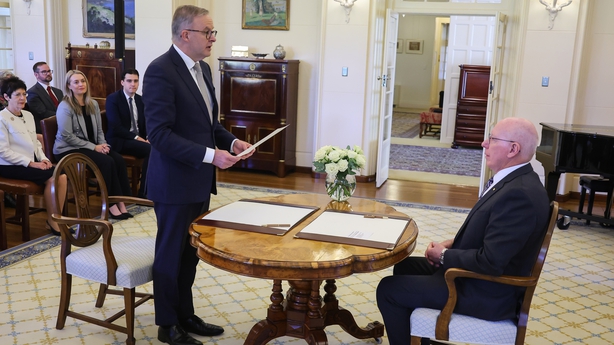 Mr Albanese, raised in public housing by a single mother on a disability pension, was sworn in by Governor-General David Hurley at a ceremony in the national capital, Canberra.

"It's a big day in my life but a big day for the country, when we change the government," Mr Albanese told reporters outside his Sydney suburban home ahead of the ceremony.

"I want to channel the opportunity that we have to shape change so that we bring people with us on the journey of change. I want to bring the country together."

Mr Albanese said he spoke to US President Joe Biden last night and was looking forward to meeting him alongside the prime ministers of Japan and India tomorrow. He will return to Australia on Wednesday.

"This visit aligns with what the Albanese government sees as the three pillars of Australia's foreign policy: our alliance with the United States, our engagement with the region, and our support for multilateral forums," Mr Albanese said in a statement.

Labor's campaign heavily spotlighted his working-class credentials and his image as a pragmatic unifier.

Centre-left Labor still remains four seats short of a majority of 76 in the 151 seat lower house with about a dozen races too close to call, according to television channels. Some predicted Labor might get enough seats to govern on their own.

Official results could be several days away, with the counting of a record 2.7 million postal votes under way.