Members of An Garda Síochána who died in the line of duty are being remembered at a ceremony in Dublin Castle.

In the 100 years since the force was formed, 89 gardaí have lost their lives while in service.

Family members of the deceased gardaí were joined by Minister for Justice Helen McEntee and Garda Commissioner Drew Harris at the event at Dubhlinn Gardens this afternoon.

During the ceremony, the names of the 89 officers who were killed while on duty were read aloud.

Minister for Justice Helen McEntee said the death of every Garda member in the line of duty was "both a huge loss to their family and friends, but also to the wider communities in which they lived and worked."

"I want to acknowledge how difficult it can be to be the family member or friend of a Garda member," Minister McEntee said.

"You live in the knowledge that your loved one may be put at personal risk when they go to work, and I want to thank you for supporting your family members, our Garda members, in the brave and selfless work that they do."

"These men are but three of the 89 names on the Garda Roll of Honour," she said.

"89 lives that ended too soon. These Gardaí died in the service of the State, a sacrifice that we want to remember, that we must remember.

"As Minister for Justice, I want reiterate my sincere appreciation to the members of An Garda Síochána who work year-round to keep our country safe." 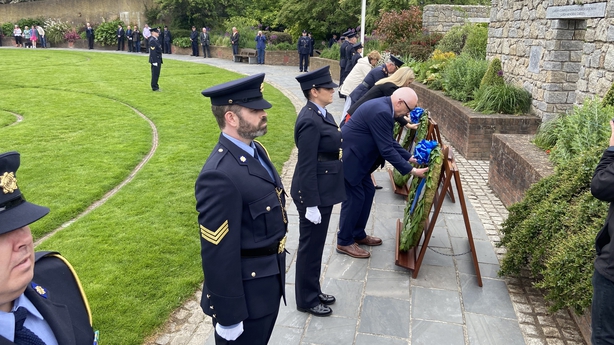 Detective Garda Colm Horkan was the last member of the force to die while on duty.

The 49-year-old was fatally shot on 17 June 2020 during an incident in Castlerea in Co Roscommon.

Family members of a number of other gardai who died in the service of the State also took part in the ceremony.

He described the event as an important day, which he said "shows us that the guards don't forget their fallen colleagues".

Mr Donegan said it is an opportunity to meet the family members of other gardaí who also died in active service.

"It's good, we all share the pain of the loss. Sometimes that's forgotten," he said.

"The tragedies themselves are tragedies, but there's a ripple effect out through the families, down through the generations and to acknowledge that is very important."

He said that gardaí "are ordinary people who live in the community and, on occasion, they make this sacrifice and I think it's very important that is acknowledged". 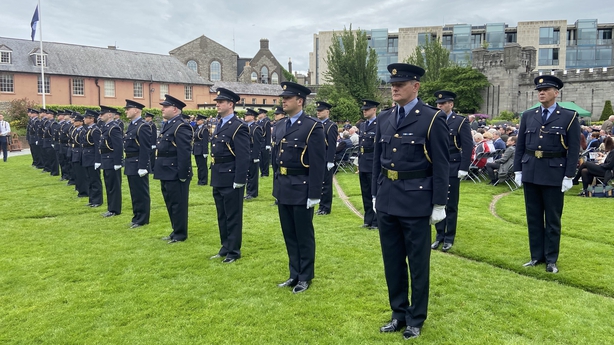 Bernie Morrissey, whose husband, Garda Sergeant Patrick Morrissey, was shot dead during a robbery in 1985, read a reflection.

She described the ceremony as "beautiful and very solemn".

"It's very important to all of us, because to be forgotten would be the saddest thing of all," Ms Morrissey said.

"It's lovely to honour those who have given their lives in the service of the country, so it's very important to family and friends."

The Garda Commissioner described the memorial as "the most important day of the year for An Garda Síochána."

Drew Harris said "today is foremost about honouring the members of An Garda Síochána killed in the line of duty."

He said it is "also about the families of the fallen, who have suffered enormous loss."

"We must not forget that our colleagues are not alone in making this sacrifice. In the end, their courage came at a heavy loss to you, their loved ones."

Minister McEntee said today was a time to remember and recognise the sacrifice made by the 89 Garda members who lost their lives.

On the centenary of the force Ms McEntee said "from its genesis in a meeting in the Gresham Hotel in February 1922, convened by Michael Collins, An Garda Síochána remains to this day one of the greatest success stories of the early years of our State."

The ceremony concluded with wreaths being laid and a minute’s silence in memory of the fallen officers, before the national anthem was played.

It is the first time since 2019 that the event has been held in public due to Covid-19 restrictions.

It is the location where An Garda Síochána affirmed its authority as the national policing force on 9 February, 1922, phasing out of the Royal Irish Constabulary, which ended its policing role in August of that year.