Taoiseach Micheál Martin has said there is "no substitute" for negotiations between the European Union and the UK government to resolve issues with the Northern Ireland Protocol.

The Taoiseach was speaking in Belfast following meetings with political and business leaders.

He said: "There is no substitute for a substantive series of negotiations between the European Union and the United Kingdom government in respect of solving issues in relation to the protocol.

"We accept legitimate issues have been raised, but it is our view that they can be resolved.

"We had a very interesting meeting with the Brexit business working group and it was good to hear the many beneficial impacts of the protocol on many sectors of the Northern Irish economy.

"We believe there can be a resolution of issues around the protocol, but the only way to do that is through a negotiated settlement." The Taoiseach said the UK government was "moving the goalposts" in respect of its position on the Northern Ireland Protocol.

He said: "On the UK government side, we haven't quite got a clear landing zone. The goalposts do keep moving in that respect.

"That came to light last October when we felt that the vice president of the European Commission (Maroš Šefčovič) had made very significant advances as a base for further discussions.

"What was produced this week by the UK government again indicates a widening of the picture in respect of resolving the issues of the protocol.

Taoiseach Micheál Martin said it was 'good to hear' the 'many beneficial impacts' of the Northern Ireland Protocol during a meeting with the Business Brexit Working Group | Read more: https://t.co/LMUlJX9t40 pic.twitter.com/oWVISAElYt

"Our genuine desire as a member of the European Union and understanding the issues in the north, and having listened to many concerns being articulated in the north, has been trying to resolve those issues.

"This was a deal that the UK government signed up to, ratified in their parliament and they are now unhappy with aspects of it. Well, let's try to resolve those aspects in a meaningful way and that means getting into the tunnel and negotiate in a serious way."

Mr Martin also said that the Northern Ireland Assembly and Executive should be formed while negotiations continue between the UK and the EU over the protocol.

All political parties in Northern Ireland have indicated a desire to get the Stormont Assembly back up and running, Taoiseach Micheál Martin has said following meetings with party leaders | Read more: https://t.co/LMUlJX9t40 pic.twitter.com/JVfIPFg4E6

He said: "All parties said to us that they are willing to abide by the (Assembly election) result.

"The Democratic Unionist Party were clear that they have no difficulty in taking up the deputy First Minister position but they have issues with the protocol.

"Our view is there should be parallel discussions.

"The Assembly and the Executive should operate parallel with the UK government and the European Union engaging in substantive negotiations to resolve issues which have arisen in respect of the operation of the protocol."

DUP leader Jeffrey Donaldson said he told Taoiseach Micheál Martin that he is not interested in a "sticking plaster" approach to solving problems with the Northern Ireland Protocol.

The DUP is currently blocking the re-establishment of Stormont's power-sharing institutions in protest at the protocol, which has created economic barriers on trade between Great Britain and Northern Ireland. 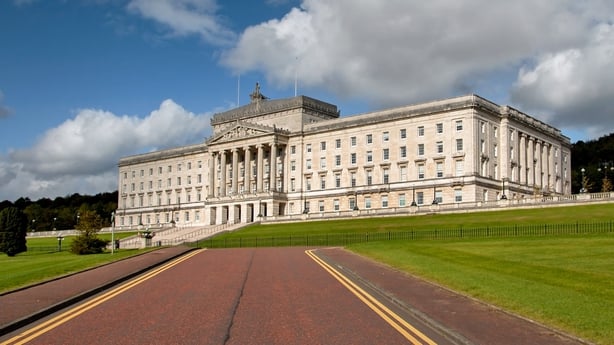 Following his meeting with the Taoiseach, Mr Donaldson said: "We spelled it out very clearly to him the problems with the protocol, the harm it is doing to Northern Ireland and that we need a solution, we need decisive action to deal with these problems.

"We are not interested in a sticking plaster approach, or tinkering around the edges, it has to be fundamental change which respects Northern Ireland's place within the UK internal market and nothing short of that will suffice."

The Taoiseach's visit comes in the wake of the UK government's move to act unilaterally to scrap parts of the protocol.

Meanwhile the Minister for Foreign Affairs has said he had "made clear" to British foreign secretary Liz Truss that the Government opposes the UK breaching international law.

Simon Coveney made the comment following his meeting with Ms Truss about ongoing concerns around the Northern Ireland Protocol.

Following his meeting with Ms Truss, the Fine Gael minister tweeted: "I made clear Ireland's opposition to the UK breaching international law.

"The UK needs to get back to talks with the EU."

"I thanked her for her statements and that of the Chancellor, standing up for international law and the Brexit deal," Mr Coveney said following his meeting.

"The EU is ready to find solutions in response to the concerns of unionism in NI but needs a partner at the table."

The British government has said it was prepared to legislate to set aside parts of the protocol in the coming weeks unless it can reach a compromise with the EU.

The EU has cautioned against such a move and Commission President Ursula von der Leyen spoke to the Taoiseach yesterday.

She later said Ireland and the EU were "on the same page" and that international agreements could not be "disapplied unilaterally".

"The UK needs to work with us to find joint, workable solutions," she said.

Yesterday, Speaker of the US House of Representatives Nancy Pelosi said that the UK would lose out on a free trade deal with the US if it chose to undermine the terms of the Good Friday Agreement.

DUP leader Jeffrey Donaldson said that for two-and-a-half years unionist politicians had been voicing opposition to the protocol and there would have to be change before there could be progress.

"There is a great prize of stable devolution if we can remove the dark shadow of the protocol from our politics.

"The current protocol is incompatible with the Belfast/Good Friday Agreement. The Irish Government can't have both," he said.

Speaking on the way in to meet the Taoiseach, Sinn Féin's Northern Ireland leader Michelle O’Neill said he had an important role to play.

"The Taoiseach has a significant role in terms of being the co-guarantor of the Good Friday Agreement and therefore has a stewardship role," she said.

"At a time when democracy is being denied, at a time when the DUP are continuing to prevent the facilitation of an Executive that can actually start to deliver for the public, I think it’s important that he’s here to assert his role as co-guarantor."

Speaking to RTÉ's News at One, Mr Beattie insisted the checks on goods is the crucial issue at play.

Mr Beattie said that he is particularly concerned about the cost of living in Northern Ireland and insisted that he is "ready to get into government to start dealing with that issue".

He added that he wished the DUP would do the same.

SDLP leader Colum Eastwood told RTÉ's Drivetime that "flexibilities" can be found within the Northern Ireland Protocol, but insisted that Britain is "pretending that the inflexibility is on the side of Europe".

Mr Eastwood said that by doing this Britain is using Northern Ireland as a "political tool".

Today's talks with the Taoiseach follow talks at the start of the week between the parties and British Prime Minister Boris Johnson.

Mr Martin said he does not believe a border poll should happen in the next two years of his Government, which will be focused on the shared island agenda.

Speaking on Good Morning Ulster, the Taoiseach said unity was not just about territory, but about reconciling people on the island of Ireland, and "enabling people to take down the barriers of mistrust".

He said the Government has engaged in multiple cross-border initiatives, and had allocated €10m for such projects under the shared island agenda.

He said both are committed to protecting the Good Friday Agreement.

Great pleasure to welcome the US Congress @WaysMeansCmte led by @RepRichardNeal, as 🇪🇺 and 🇺🇸 continue to cement our powerful bond.

We're equally committed to protecting the Good Friday (Belfast) Agreement: joint solutions implementing the Protocol are the only way to do so. pic.twitter.com/VJN07w64rd