Fiadh has bumped Grace down the list to take the top spot for baby girls' names registered in 2021, while Jack remains the most popular name for boys.

Of registrations for boys in 2021, the top five most popular names were Jack, Noah, James, Conor and Rían.

Fiadh claimed the top spot for girls for the first time, followed by Grace, Emily, Sophie and Éabha.

Grace, Emily and Sophie have been permanent fixtures in the top five names for baby girls every year since 2016. 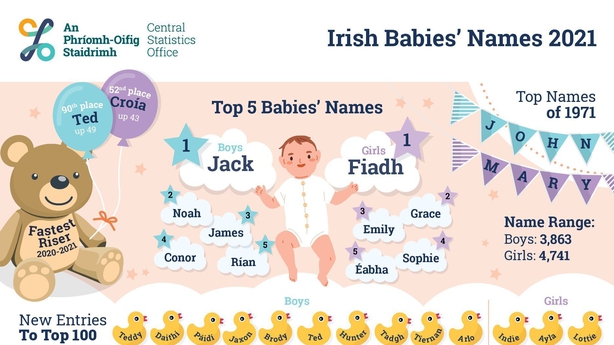 Commenting on the trends in Irish baby names, CSO statistician, Gerard Dolan said: "Looking back 50 years ago to 1971, John, Michael, Patrick, David and James were the names most favoured by parents of newborn baby boys. There were 198 male newborns named John in 2021, compared with 2,654 in 1971.

"Interestingly, not one of the top five names for girls in 2021 appeared in the top 100 names a half-century earlier.

"Mary, Catherine, Margaret, Fiona and Sinead were the most popular names for baby daughters in 1971, with 1,907 baby girls named Mary in that year."

After only one new entrant into the top 100 names for boys in 2020, there were ten new entrants for 2021: Teddy, Daithí, Páidí, Jaxon, Brody, Ted, Hunter, Tadgh, Tiernan and Arlo.

There were three new entrants to the top 100 for girls: Indie, Ayla and Lottie.