CEO of Safe Ireland Mary McDermott has called for an all of Government response to domestic, sexual and gender-based violence in the country.

It comes after Ashling Murphy was attacked and killed as she ran along the banks of the Grand Canal in Tullamore, Co Offaly, last Wednesday.

The 23-year-old primary school teacher and musician will be laid to rest tomorrow. Her funeral mass is due to take place in her local church, St Brigid in Mountbolus at 11am, and will be livestreamed.

Speaking on RTÉ's Morning Ireland, Ms McDermott said that currently, there is no minister with full responsibility for domestic, sexual and gender-based violence but that responsibility for these matters is spread across a number of departments.

She said it is fragmented and scattered and any deep seated problem like this needs a whole of Government response.

Ms McDermott said a high-level unit in the office of the Taoiseach should be established and everything - from language down - should be addressed.

Minister for Justice Helen McEntee has said that she intends to publish a new national strategy on domestic, sexual and gender-based violence at the beginning of March.

Meanwhile, teacher unions are asking schools around the country to observe a minute's silence at 11am tomorrow in memory of Ms Murphy.

The Irish National Teachers' Organisation, the Association of Secondary Teachers' in Ireland, Fórsa and the Teachers' Union of Ireland are urging all schools and colleges to join in the tribute.

The INTO said: "We are encouraging schools to fall silent to remember a beloved primary school teacher, taken far too soon, and show our solidarity with her friends, family, colleagues and pupils as Ashling is laid to rest."

MLAs gather for vigil in memory of Offaly teacher

Northern Ireland MLAs gathered in front of Parliament Buildings at Stormont for a vigil this morning, ahead of the Assembly resuming following its recess. 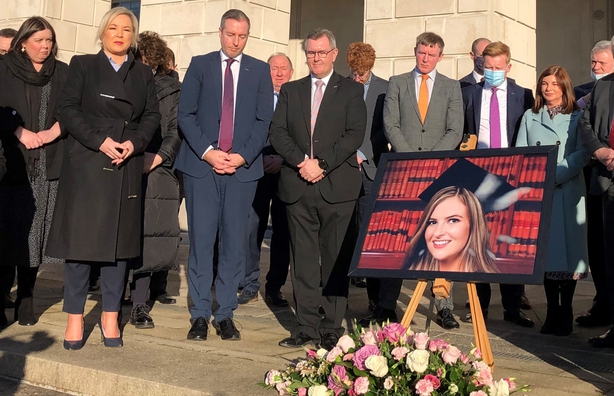 "She was attacked and killed while out running in Tullamore, Co Offaly.

"There are simply no words to convey the cruelty and injustice of what happened to Ashling, nor the heartbreak and sorrow of her loss.

"Our hearts go out to her family and all who loved her.

"Domestic, sexual and gender-based violence is an epidemic."

Mr Givan said men needed to step up to challenge abusive behaviour towards women and girls.

"As a father of three daughters I know last night when I was in Lisburn and we held a vigil, I was thinking about them.

"I was thinking about the type of society that they are growing up in, and when they get to that age they should feel safe, they be respected, they should not be objectified," he said.