A rally protesting against Northern Ireland's Covid-19 certification scheme has taken place in Belfast, with several hundred people gathering outside the City Hall.

Many of those in attendance were carrying anti-vaccine and anti-Covid certification placards and banners.

Police temporarily closed one of the busiest roads in the city, as a number of speakers addressed the rally.

Demonstrators were told that the event was not a protest against vaccines, but rather opposing the certification regulations which were introduced on Monday.

The certification scheme is currently mandatory in licensed premises, as well as cinemas and theatres.

People entering these premises will be asked for proof of vaccination or a negative test result under the regulations.

But there will be a short grace period, with no fines issued until 13 December.

Speakers at the City Hall rally told the crowd that it was an event to campaign for everyone to be treated equally "regardless of their medical status". 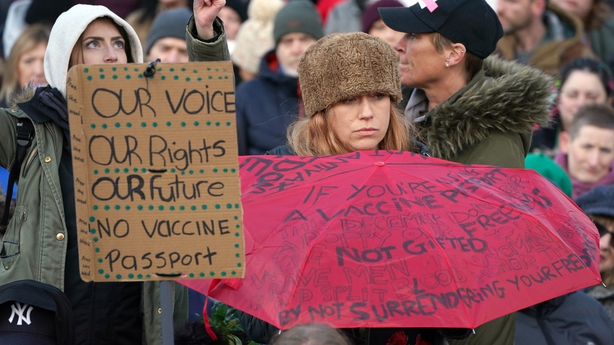 There were loud cheers when it was stated that further rallies would follow.

Beside the rally, shoppers queued to gain access to the Christmas market in the grounds of the City Hall where they were asked to show their vaccination certificates.

He also said that a helpline to give assistance to those applying for the paper or digital certificates is currently dealing with 3,000 calls a day.

The issue has caused controversy in the Executive, with the DUP opposing mandatory Covid certification. MLAs are set to hold a debate on the regulations next week.

Meanwhile, around 50 community pharmacies are taking part in the Big Jab Weekend across Northern Ireland this weekend, designed to increase uptake of the booster vaccine.

The pharmacies are providing first and second doses to anyone over 18, as well as booster jabs for those who are eligible.

The programme in pharmacies will complement the ongoing booster provision by a network of health trust hubs, trust walk-in clinics and GPs.

The chief executive of Community Pharmacy NI, Gerard Greene, said: "Throughout the pandemic, the community pharmacy workforce has gone above and beyond to support people across Northern Ireland and have played a vital role in rolling out the Covid-19 vaccine.

"Pharmacies are ideally placed in the heart of communities and provide a very accessible option for people - I would encourage people to come forward for vaccination this weekend and get that all-important protection that vaccination provides."

A further nine deaths of patients who had previously tested positive for Covid-19 have been reported in Northern Ireland.

Another 1,642 cases of the virus were also notified.