Santa Fe County Sheriff Adan Mendoza said authorities have recovered a live lead projectile that was fired from the firearm used by actor Alec Baldwin in the accidental shooting death last week on a movie set in New Mexico.

The incident happened during a rehearsal for the movie Rust for a scene inside a church at the filming location in New Mexico.

The investigation has recovered 500 rounds of ammunition from the set, Sheriff Mendoza said, adding that detectives believe they were a mix of blanks, dummies and live rounds.

"We suspect there were other live rounds found on set," Sheriff Mendoza said.

"We're going to determine how those got there, why they were there, because they shouldn't have been there."

"I think there was some complacency on this set," he added.

No one has been charged. Mr Mendoza said it is too early to discuss charges, but said charges will be filed if warranted.

"All options are on the table," said Ms Carmack-Altwies. "No one has been ruled out at this point." 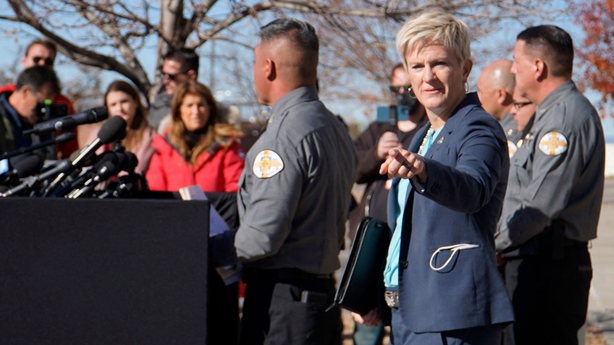 The shooting has sent shockwaves through Hollywood, prompting a debate about safety protocols in film and television - including whether certain types of guns used as props should be banned - and working conditions on low-budget productions.

Authorities have said in court filings that Mr Baldwin last Thursday was handed what he thought was a "cold" - or safe - gun by the film's assistant director David Halls.

He took it from a cart used by Hannah Gutierrez, who was employed to oversee firearms and their safety in a job called an armourer. Both have been interviewed.

The gun instead contained what police called "live rounds", and a shot hit Ms Hutchins in the chest and director Joel Souza, standing behind her, in the shoulder.

Ms Hutchins was transported by helicopter to the University of New Mexico Hospital, where she was pronounced dead. Mr Souza was treated at a hospital and released.

Mr Baldwin, 63, serves as a co-producer of Rust, a Western film set in 1880s Kansas, and plays an outlaw grandfather of a 13-year-old boy convicted of an accidental killing.

Production had been taking place at the Bonanza Creek Ranch, located south of Santa Fe, and has been halted.

Mr Baldwin has called it a "tragic accident" and, like other cast and crew, is cooperating with police.

The film's producers have hired the law firm Jenner & Block to investigate the shooting.

In a letter sent to cast and crew last night, the film's production team said Jenner "will have full discretion about who to interview and any conclusions they draw".

Mr Baldwin was drawing a revolver across his body and pointing it at a camera while rehearsing when the weapon fired, according to a sheriff's department affidavit released on Sunday.

Detectives recovered two boxes of "ammo", "loose ammo and boxes" as well as "a fanny pack w/ammo", along with several spent casings, according to a court filing.

Before the incident, camera operators had walked off the set to protest against working conditions, according to the affidavit.