Four Colombian soldiers died and three were wounded in attacks which the army said were carried out by the Gulf Clan drug gang in retaliation for the weekend arrest of its leader.

Army General Juvenal Diaz told Blu Radio it was "retaliation for the capture of the most wanted drug trafficker".

In a second incident, in the same department, the army said in a statement one of its units was "harassed" by Gulf Clan members.

One soldier was injured and later died, though the army did not say when this happened.

Dairo Antonio Usuga, known as Otoniel, was arrested in a dense jungle in Antioquia department, a Gulf Clan stronghold, in an operation on Saturday that involved hundreds of soldiers backed by 18 helicopters.

Colombia is now working towards extraditing the country's most-wanted drug trafficker to the US, where the 50-year-old has been indicted on trafficking charges. 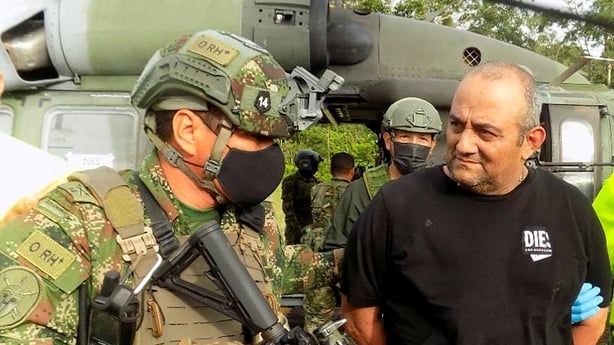 General Diaz said the overnight attackers detonated explosives under two passing military vehicles in the port city of Turbo, then fired at the occupants with rifles, killing three.

"We reject and condemn the cowardly murder of three soldiers ... when they were carrying out surveillance work in Turbo, Antioquia," President Ivan Duque said on Twitter.

"We reiterate that these criminals and drug traffickers who attack our security forces will be prosecuted and brought to justice," he warned.

General Diaz said the military was on high alert for further attacks by the Gulf Clan, which counts some 1,600 fighters in its ranks, according to the Indepaz think tank.

The Colombian government blames the group, financed mainly through drug trafficking, illegal mining and extortion, for being one of the main drivers of the worst bout of nationwide violence since the 2016 signing of a peace pact with FARC guerillas ended decades of civil war.

Colombia is the world's biggest producer of cocaine and the US its biggest consumer.