EU chief Ursula von der Leyen has said Brussels would not pay to build barriers on the bloc's borders to keep out migrants, despite demands from a string of countries.

Ms von der Leyen, head of the EU's executive, said she told leaders at a summit in Brussels there was a long-standing position "that there will be no funding of barbed wire and walls".

A number of EU member states facing influxes on their borders have ramped up pressure for the bloc to use its budget to finance barriers.

Leading the way have been Poland and Lithuania as they scrambled to deal with a surge of illegal crossings from neighbouring Belarus.

The EU accuses Minsk of sending across thousands of migrants from the Middle East and Africa in retaliation for sanctions on the regime of President Alexander Lukashenko over his crackdown on opponents.

"We consider the behaviour of the Belarus government as a hybrid attack," Ms von der Leyen told journalists.

The leaders agreed to hit back at Minsk with more sanctions "as a matter of urgency", the official conclusions from the summit said.

"Lukashenko's regime, now they'll see that the European Union is able to react, is able to take the decisions, and is ready to defend itself," Lithuanian President Gitanas Nauseda said.

Poland has drawn criticism for its hardline approach to the crisis that has seen guards push back migrants on the border.

The United Nations today demanded urgent action to save lives and avoid suffering on the EU-Belarus border, following the deaths of several asylum seekers.

UNHCR, the UN Refugee Agency, said another fatality this week meant there had now been eight deaths along the border between Belarus and its European Union neighbours Latvia, Lithuania and Poland.

Warsaw has proposed building a €350 million wall on its border with Belarus. 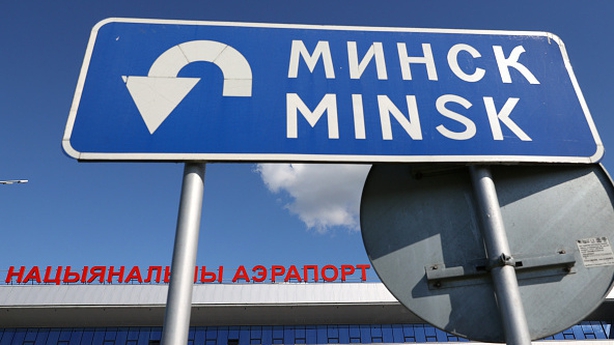 Taoiseach Micheál Martin has said Ireland would favour EU sanctions against Irish-registered companies leasing aircraft to Belarus, which has been accused of using the state airline to collect migrants in the Middle East and Africa and depositing them on Europe's borders.

Speaking on the second day of the EU summit in Brussels, Mr Martin described what he called the weaponization and trafficking of migrants by the Belarussian leader Alexander Lukashenko as heinous and reprehensible and a very low form of behaviour.

He said he would support the use of sanctions against the national airline Belavia, and any Irish-registered leasing companies that facilitated the collection of refugees in developing countries to be brought to Minsk and then dumped at the Polish, Latvian and Lithuanian borders.

However, the Taoiseach said existing contracts between such leasing companies and the regime were complex.

Officials have said that it is not yet clear which Irish-based leasing companies might be involved, given that many of them only provide short haul aircraft, when the regime was gathering refugees from more distant countries.

As the EU faces fresh waves of migration, and not just from Belarus, there were calls at the summit for greater solidarity, so that it is not only frontline member states like Greece and Italy which bear the burden of new waves of migrants.

But the new Austrian Chancellor said the EU should help Lithuania build a wall on its eastern border.

This morning's meeting also saw warm tributes being paid to the German Chancellor Angela Merkel, in Brussels for her 107th and probably last summit.

The president of the European Council Charles Michel said a summit without Angela Merkel was like Rome without the Vatican or Paris without the Eiffel Tour.