Belarus has said it is recalling its ambassador in Paris for consultations after French envoy Nicolas de Bouillane de Lacoste was ordered to leave the post-Soviet country amid a diplomatic crisis with the EU.

"The Belarusian ambassador to France, Igor Fisenko, has been recalled to Minsk for consultations," the Belarusian foreign ministry said in a statement.

Like other EU countries, France has not recognised Belarusian strongman Alexander Lukashenko's claim to a sixth presidential term in disputed elections in August last year.

The French ambassador, who arrived in Belarus last November, presented his credentials to the Belarusian foreign minister but not Mr Lukashenko.

The Belarusian foreign ministry said today that the move was a violation of standard diplomatic protocol.

It said it regretted France's stance and was "interested in restoring fully-fledged operations at both missions."

The European Union and the United States have imposed sanctions on Mr Lukashenko's regime over a post-election crackdown on dissent after historic protests erupted in Belarus against his rule.

But the 67-year-old leader has maintained his grip on power with the backing of ally and creditor Moscow.

In a message to the Belarusian people, he said he had met many "courageous" people during his tenure in the country.

"Know that we will stay by your side," he said. "We call on you to never give up hope for better days."

Minsk has cut ties with other Western envoys in recent months.

In August, Minsk revoked consent for the appointment of the US ambassador, career diplomat Julie Fisher, who in December had been confirmed as the first US envoy to the ex-Soviet country since 2008.

The country's leading opposition figures have either been jailed or have fled the country. 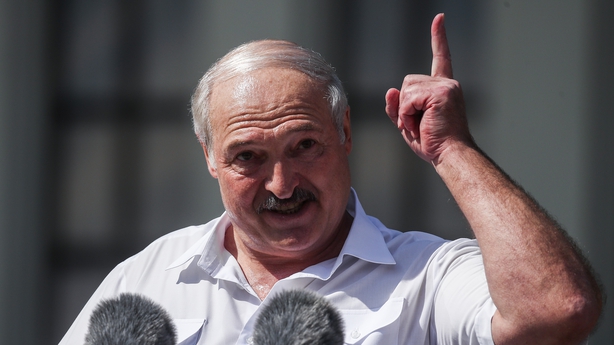 The EU will today discuss further economic sanctions on Belarus, including on airlines, to increase pressure on President Lukashenko, whom it accuses of helping undocumented migrants to enter Poland and the Baltic states.

A tightening of sanctions would follow broad measures imposed on Belarus' economy in June over Mr Lukashenko's crackdown on protesters.

Many EU states now also accuse Mr Lukashenko of encouraging illegal migrants, many from Iraq, Iran and Africa, to enter the European Union via Belarusian territory in a retaliatory "hybrid war" they say aims to destabilise the bloc.

"We need to introduce stricter sanctions ... It means to put so-called tourism companies that are organising flights (under sanctions)," Latvian Foreign Minister Edgars Rinkevics said as he arrived for a meeting with his EU counterparts in Luxembourg.

"I also believe that we need to sanction Belavia fully, so that it cannot receive any kind of support," he said, referring to the national airline.

Although Belavia has already been banned from flying over EU airspace, it still leases planes from EU countries, notably Ireland.

Since August, Poland, Lithuania and Latvia have reported a surge in illegal border crossings from Belarus. They accuse Minsk of flying in migrants from abroad and dispatching them into the EU.

Mr Lukashenko denies the accusation and has blamed the West for what he says is a looming humanitarian catastrophe this winter after migrants were left stranded and freezing on the Belarusian-Polish border.

Ireland appeared wary of immediately preventing Belavia from leasing planes because of legal obligations on existing contracts, although Minister for Foreign Affairs Simon Coveney said he was open to preventing future deals.

"While Ireland wants to increase sanctions and pressure on the Belarusian regime, we've also got to make sure that is practicable and implementable," he told reporters in Luxembourg.