"It is 561 days since we introduced the toughest measures in Norway in peacetime ... Now the time has come to return to a normal daily life," Prime Minister Erna Solberg told a news conference.

The decision to no longer require social distancing will allow culture and sports venues to utilise their full capacity, rather than just a portion of seats, while restaurants can fill up and nightclubs reopen.

Ms Solberg had so far implemented the first three stages of a four-step plan to remove social and economic restrictions imposed since March of last year, but the final step was postponed several times amid worries over infection rates.

"In short, we can now live as normal," Ms Solberg said.

About 76% of all Norwegians have now received at least one dose of a Covid-19 vaccine, while 67% of the population is fully vaccinated according to the Institute of Public Health.

"I want to say: thank you very much Norway," the Prime Minister added. 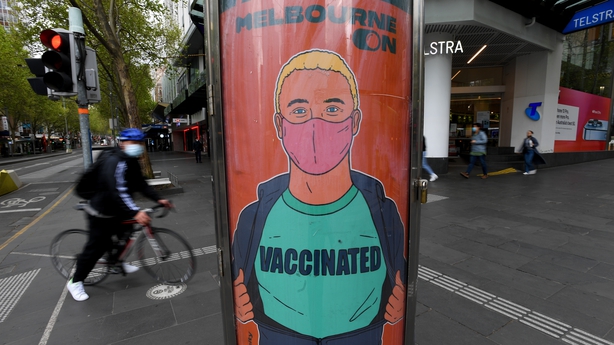 More than half of Australia's adult population are now fully vaccinated against Covid-19.

Authorities are stepping up inoculations in hopes of easing restrictions while cases linger near daily record levels in Victoria.

Australia is grappling with a third wave of infections from the highly infectious Delta variant that has led to lockdowns in its two largest cities, Sydney and Melbourne, and the capital, Canberra, affecting nearly half the country's 25 million people.

These tough curbs and a decision to shut construction sites for two weeks over the rapid spread of the virus among workers triggered anti-lockdown protests in Melbourne during the week.

As most of Australia's southeast remains under strict stay-at-home restrictions, virus-free Western Australia is gearing up to host the Australian Rules Football Grand Final for the first time, in front of 60,000 fans at Perth Stadium tomorrow.

Victoria today reported one new death and 733 new infections, its second biggest daily rise in the pandemic, down from the record high of 766 yesterday. Most cases were detected in Melbourne.

Both New South Wales (NSW) and Victorian leaders have pledged more freedom to residents once full vaccinations in people older than 16 reach 70%, which is expected next month.

So far, 57% have been fully vaccinated in NSW, above the national average of 50.1%. Two million doses were administered in the country in the last seven days.

Daily cases may have stabilised in NSW, the epicentre of the country's worst outbreak, as it reported 1,043 new infections, down from 1,063 yesterday.

"We are seeing pleasing declines ... hopefully we will see numbers decrease in coming days and weeks," state Chief Health Officer Kerry Chant said during a media briefing in Sydney.

But officials flagged any easing of curbs in NSW would be done "cautiously and moderately" when the state hits its 70% dual-dose target, around 6 October, to avoid spikes in cases that could overwhelm its health systems.

Even with the fast-moving Delta outbreak, Australia has largely avoided high numbers seen in many comparable countries, with about 94,000 cases and 1,208 deaths, and the death rate is lower than last year because of higher vaccination rates.

"It is 561 days since we introduced the toughest measures in Norway in peacetime ... Now the time has come to return to a normal daily life," Prime Minister Erna Solberg told a news conference.