Saturday marks the 20th anniversary of the 9/11 attacks on the United States that left nearly 3,000 people dead.

The Al-Qaeda plane hijackings of 11 September 2001 were the first foreign attack on the US mainland in nearly two centuries.

It ruptured America's sense of safety and plunged the West into war in Afghanistan - a military operation that has only just finished, with the Taliban back in power.

A third commercial jet hit the Pentagon, killing 184, and 40 more died after a fourth plane crashed into a field in Shanksville, Pennsylvania, after a passenger revolt.

Here is a timeline of events that fateful day, which reshaped the course of US history, drawing information from the 9/11 Memorial website and the 9/11 Commission report.

American Airlines Flight 11, a Boeing 767 flying from Boston to Los Angeles with 92 people on board - including five hijackers - crashes into the North Tower of the World Trade Center.

The impact leaves a giant hole in the building's facade. Thick smoke trails into the sky from the tower's upper floors.

United Airlines Flight 175, also a Boeing 767 making a Boston to Los Angeles connection, this time with 65 people on board - including five hijackers - hits the World Trade Center's South Tower, sparking a massive explosion.

George W Bush's chief of staff informs the US president, who is reading a story to children at Emma E Booker Elementary School in Sarasota, in Florida, that the United States is under attack.

Bush calls the blasts "an apparent terrorist attack" during brief remarks at the school. He orders "a full-scale investigation to hunt down and to find those folks who committed these acts."

American Airlines Flight 77, a Boeing 757 headed from Washington's Dulles airport to Los Angeles with 64 people on board - including five hijackers - smashes into the west facade of the Pentagon just outside the US capital.

The US Federal Aviation Administration orders all commercial flights in the United States to land as quickly as possible, after earlier halting all departures.

United Airlines Flight 93, a Boeing 757 traveling from Newark to San Francisco with 44 people on board - including four hijackers - crashes into a field near Shanksville, Pennsylvania, after passengers and crew who had learned about the other attacks fought with the hijackers.

The north tower of the World Trade Center collapses, an hour and 42 minutes after it was struck. A huge cloud of dust blankets lower Manhattan.

In an address from the Oval Office, Bush denounces the attacks as "evil, despicable acts of terror."

He announces that thousands have died and says Washington will "make no distinction between the terrorists who committed these acts and those who harbour them." 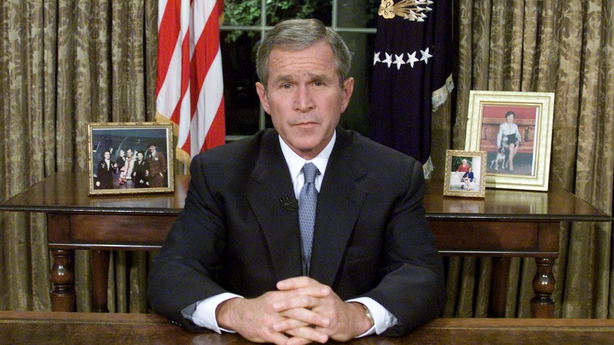